How to protect the faithful in today’s houses of worship 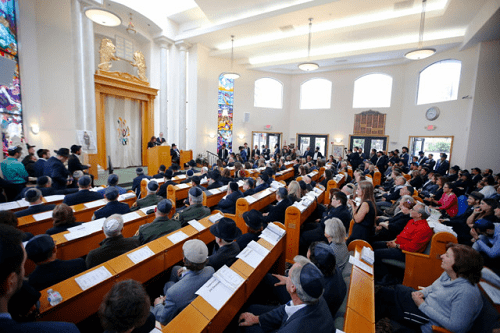 Hundreds of people attended a service for Lori Gilbert-Kaye, 60, at the Chabad of Poway on April 28, 2019 in Poway, Calif. Gilbert-Kaye was killed by a gunman at the synagogue.
(K.C. ALFRED/THE SAN DIEGO UNION-TRIBUNE/TNS)

It’s been nearly three months since a gunman strode into the Chabad of Poway synagogue and shot four worshipers, killing one. What followed was an all too common reaction on the part of most Americans: shock, outrage, demand for action, and then, sadly, many moved on to the next news story. Yet the great majority of America’s soft targets remain minimally protected.

The continuing epidemic of mass shooting incidents in the United States affects more than the religious community. In fact, according to the Gun Violence Archive, there have been more than 227 mass shootings, defined as incidents where four or more persons are injured or killed by a firearm, in the United States, as of July 15, this year. But there’s no question that houses of worship, both domestically and around the globe, have increasingly become targets for perpetrators of such violence. A little more than a month before the Chabad of Poway shooting, a gunman killed 51 and wounded 49 at two mosques in New Zealand. Mass shootings at houses of worship in the United States in the last ten years have caused 54 deaths and injured an additional 40 people.

Religious leaders globally – rabbis, pastors, imams and others – have a duty of care obligation to their congregants, lay staff, officiants, and other guests they host. Unsurprisingly, many of them are struggling with how to quickly increase the security of their facilities to meet such duty of care. The best advice for religious leaders is to seek the assistance of professionals who can help to immediately enhance safety and security.

All religious leaders should seek to foster relationships with local law enforcement agencies. This will go a long way in creating the most comprehensive security plans for their particular location and facilities. They should share information about peak service times when their churches, synagogues, mosques and temples are most crowded, coordinate for increased security during religious holidays, and seek assistance with emergency preparedness planning and training.

The great majority of local law enforcement agencies are keenly aware of the threats faced by houses of worship and have already taken steps to increase security for those in their area. Many agencies have mapped out the locations of all houses of worship within their areas of responsibility, modified existing patrol routes to include regular patrols of these locations, particularly on solemn holidays and during peak service times, and coordinated with religious leaders to ensure adequate emergency planning and preparedness. Increasing situational awareness and having detailed emergency preparedness plans in place can prove lifesaving in the event of an active shooter incident or other unexpected act of violence.

In addition to preparedness, there are tens of millions of dollars in grant funding available from both the states and federal government to assist private, religious entities with emergency preparedness planning, target hardening, active shooter training, and other safety and security measures. However, the process of requesting grants can be onerous and timeframes between the submission of a grant and its final disbursement can be lengthy. Reports indicate that Chabad of Poway had requested a federal grant to upgrade security that took nearly 10 months to be approved and disbursed. Some religious organizations have sought out professional security consultants to guide them through the application process to ensure that their justifications are sufficient,  help them cut through the red tape of the process, and ensure training and security enhancements are adequate for their facilities.

Preventing the next radical attack, or minimizing the effects of it, will take a coordinated, sustained effort. Now is the time to take the first steps toward increasing preparedness.

James T. Hayes, Jr. is a retired Special Agent in Charge with the Department of Homeland Security. He is currently a Vice President with Guidepost Solutions.