How QSRs can benefit from integrating video surveillance with POS systems 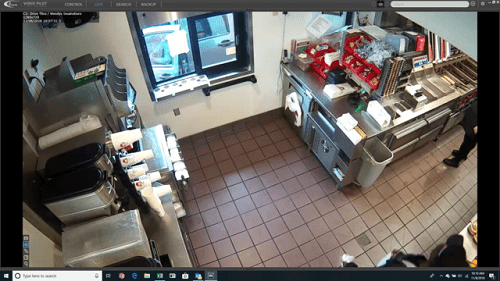 Fast-casual restaurants and quick-service restaurants (QSRs) have traditionally installed surveillance cameras to deter crime, encourage safety and improve efficiency. However, despite the availability of less expensive IP cameras and DVRs that capture clearer images than ever, these systems often stood alone and were not integrated with any of the other electronic systems used in the industry.

Today, much of that is changing.  Savvy owners and managers now expect cameras to be integrated with existing Point-of-Sale (POS) systems, drive-through order boards and speed-of-service timers.  By doing so, critical (and complementary) information that once was separate, is now tied together.  Best of all, the latest technology can identify and highlight suspicious activity for quick review, minimizing time spent fast-forwarding through countless hours of recordings.

Armed with more accessible and complete information, restaurants now have better tools to deter theft by employees, dispute bogus credit card chargebacks and reduce fraudulent injury claims.  For some, integrated video is even being used to improve the quality and speed of service as well as improve employee retention.

“By integrating advanced surveillance capabilities with POS systems to deter theft and fraud, as well as streamline operations, you could get ROI in one to two years,” says James Eddy, IT Director with loss prevention oversight for Crystal Lake Partners, an operator of 36 Popeyes locations in Kansas, Missouri, Oklahoma, and Indiana.  “It helps to ensure that we have the best possible product, service and operation while controlling waste.”

However, reaping the full benefits of integration requires more than purchasing an IP surveillance system from a big box store and installing it.  For such systems to be truly be integrated together there must be a seamless tie-in with existing POS and other electronic systems.

To provide theft deterrence, some POS software, such as Focus by ERC, a hospitality systems POS integrator, can even create an audit trail with video, as well as provide alerts with video if something appears to be an exception from the norm.

“When a video system is used in conjunction with integrated POS data to track every deposit or withdrawal from registers or a store safe, it is hard for anyone to say, ‘That’s not me in that picture,’” says Chuck Rollins, President of ERC.

ERC has supplied over 10,000 restaurants with POS systems including Arby’s, Popeyes, KFC and Burger King.  The company also provides POS systems for Kahala Brands, which manages 18 brands worldwide at more than 3,000 locations, including Cold Stone Creamery.

According to Eddy, ERC integrates and supports a range of equipment for the new and upgraded stores of their Popeyes operation.  This includes complete interior/exterior surveillance camera coverage, POS terminals running Focus software, and drive-thru confirmation boards, drive-thru timers and drive-thru headsets.

Eddy says that configuring a store’s POS system to automatically embed a text overlay into surveillance video recorded at the register can effectively track transactional theft such as false refunds.

“We can search for refunds by employee, date range, and play a video clip to tell very quickly and clearly if he or she is legitimately refunding money to a customer or not,” says Eddy.

When it comes to food theft, this capability enables a manager to compare the order a clerk rings up at the register (including dollar amount and number of items) with real-time video of the food as it is passed over the counter to the customer.  Any mismatch between an order entered into the POS terminal and what is given to the customer could be an error, but it also could be an attempt to give free food to friends.

“Theft by transaction is a bigger concern for us than the typical missing product in retail outlets,” agrees Shea Miller, Director of Loss Prevention & Process Enhancement at Hojeij Branded Foods, an airport restaurant company that operates over 40 brands including Arby’s, Wendy’s, Chick-fil-A, and P.F. Chang’s in a nationwide portfolio.  “So, it is crucial that our POS transaction data is overlaid onto camera video.  That way we can see what the cashier enters into the POS system as we view the video and can identify any suspicious transactions such as discounts, voids, etc.”

Hojeij currently deploys over 600 surveillance cameras by i3, a Canadian surveillance device manufacturer, facilitating over 1,000 camera views/angles, on 37 NVR/DVR devices, in 14 airports and two offsite buildings, covering more than 70 food and beverage locations.  For this arrangement, ERC provides full integration and support.

According to Miller, Smart ER exception reporting, a type of advanced filtering software included with the surveillance system, can analyze tens of thousands of these transactions to help identify patterns of suspicious activity, along with benchmarks of normal activity among various locations.

“The exception reporting eliminates us having to stare at the video for hours and hours,” says Miller.  “The report drills down to what is suspicious, so we view only those clips, instead of looking for a needle in a haystack.”

Although theft is a serious issue, for minor incidences such as giving away free food to a few friends, catching the interaction on video allows the manager to talk with employee and proactively correct the issue, instead of firing them.

This encourages employee retention instead of having to hire and train new employees.  Such a capability is vitally important when it is increasingly difficult to get good new hires, with the unemployment rate below four percent in some areas of the U.S.

Deterring and disproving fraudulent claims is another benefit of implementing easily accessible, integrated surveillance video with POS data.  The information can be used to deter potential customer chargeback fraud, for example.  Occasionally, patrons demand chargebacks, claiming they were not in the restaurant.  Previously, managers had little recourse.

“With POS and surveillance system integration, an owner or manager can quickly find the transaction, capture a photo of the purchaser from video and email it to the customer disputing the transaction,” says Rollins.  “All they have to do is ask, ‘is that you in the video?’ or ‘is that your son paying at the register with your card?’ and it usually settles the dispute right there.”

The use of surveillance video can also deter fraudulent injury claims, such as slip and fall incidents or unmerited workers compensation damages.

“Complete, integrated surveillance coverage deters customers or employees from making false or exaggerated claims,” says Eddy. “When there is a claim, we can quickly substantiate it or prove it false with our camera footage.”

Improving Speed and Quality of Service

Using video to improve efficiency and teamwork, like a football coach reviewing game tape with players, is another way to improve customer service and productivity.

“If restaurant service slows or complaints increase, you can view surveillance video to see what is going wrong,” says Miller.  “For example, maybe two employees were handling something that one could have accomplished, leaving someone else short-handed.”

“Just like a coach uses game tape to improve teamwork, video can be used to help employees see if they are in their correct positions and working together properly,” he adds. “This can help to improve customer service and optimize efficiency.”

Integrating surveillance video with other QSR equipment can also improve operation in several areas including the kitchen and drive-thru.

“We look at late night activity through video to see if kitchens are cooking appropriately, too much, or too little,” Eddy says.  “We look to see if they are wasting food, potentially serving old food, or turning guests away at a late hour. We have video screens that show our drive-thru cue so we can see the line.  This allows us to plan and gear up for a rush without compromising speed of service.”

While video surveillance cameras can be implemented as standalone QSR systems, their seamless integration with a host of other POS equipment enables far greater benefits.

Del Williams is a technical writer based in Torrance, California. He writes about health, business, technology, and educational issues, and has an M.A. in English from C.S.U. Dominguez Hills. For more info, call 800-241-6880 ext. 1002; visit www.erconline.com; or write to ERC at 4001 Cobb International Blvd., Kennesaw, GA  30152.