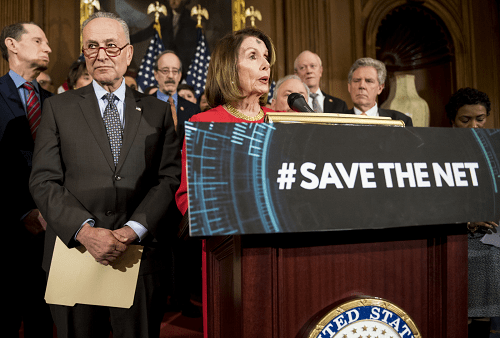 4.12.19 – NSBA – Earlier today, the House passed legislation, the Save the Internet Act of 2019 which would restore net neutrality rules recently repealed by the FCC.

On Wednesday, April 10, the House passed legislation, the Save the Internet Act of 2019 (H.R. 1644) introduced by Rep. Mike Doyle (D-Pa.) which would restore net neutrality rules recently repealed by the Federal Communications Commission (FCC). The existing FCC order, which effectively killed net neutrality stands to severely hurt smaller businesses by slowing down their sites to promote larger, paying companies. Companion legislation, S. 682, has been offered in the Senate by Sen. Ed Markey (D-Mass.).

Last week, NSBA endorsed both bills, urging lawmakers to support the effort to restore net neutrality rules. Said NSBA President and CEO Todd McCracken: “With strong net neutrality protections, the Internet can be an open marketplace where any business can compete, allowing individuals to start companies easily, market their products across the country, and connect with customers anywhere worldwide. This legislation will restore critical small-business protections when it comes to the Internet.”

Net neutrality rules, to a degree, have prohibited pay-to-play fee assessments for better and faster transmissions of data—and prevented a telecom company from favoring the transmission of their own or affiliated content and/or services. Under current FCC policy, internet companies can charge a fee for bandwidth use, stymieing access to information and content to those with fewer resources, making breaking out with a new technology, or product, or company all the more difficult, especially for smaller companies and start-ups.

NSBA applauds Rep. Doyle for his leadership on this critical issue, and thanks all Members of Congress who supported the measure earlier today. Members of the Senate are strongly encouraged to support Sen. Markey’s legislation and move on this important bill to ensure a level playing field for America’s innovators and job creators. Small-business owners and entrepreneurs face enough challenges and hurdles without government-sanctioned unfair competition from larger businesses.