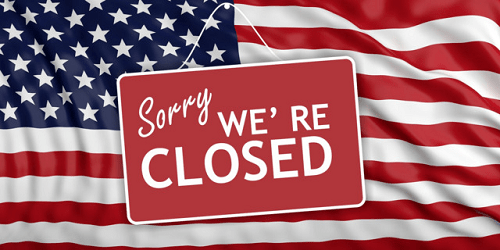 Beyond the closure of National Parks and federal offices, the ongoing partial shutdown is also having a detrimental impact on security workers as well as contractors, such as security systems integrators and guard service providers.
(IMAGE COURTESY BIGSTOCKPHOTO.COM)

With each passing day, the effects of the partial shutdown of the U.S. government, which is now officially the longest in the nation’s history, become more widespread. Beyond the closure of National Parks and federal offices, the shutdown is also having a detrimental impact on security workers as well as contractors, such as security systems integrators and guard service providers.

“The security industry is starting to feel real effects from the government shutdown, particularly for companies doing business with the federal government, or on federally-funded projects,” explains Jake Parker, Director of Government Relations for the Security Industry Association (SIA). “In some cases, companies are not able to maintain contact with government procurement, security and IT personnel needed to initiate or continue work on security projects. Many websites that provide critical information are not being updated.”

That is disconcerting news for security companies who depend on cash flow from their government contracts to keep them and their employees afloat. “What started off as the potential for an extended holiday break for some has turned into a grave scenario for large and small federal contractors,” says Derek Radoski, President of The Integration Company (TIC).

TIC, which grabbed the top spot in Security Business magazine’s Fast50 Awards last year, does extensive work in the government sector, and Radoski says many of the company’s projects are not currently funded. “TIC has been instructed to not show up on site, stop all deliveries and not perform work on unfunded projects, programs, IDIQs (Indefinite Delivery, Indefinite Quantity contracts), and BPAs (Blanket Purchase Agreements),” he explains. “Yet, we have due dates that have passed and are approaching. To stay compliant, we are still delivering responses to empty desks.”

Even more concerning, according to Radoski, is that TIC has not been able to bill the government for the labor provided by two-thirds of his team on various contracts. “At the end of the day, we want to take care of our team members so they can take care of their families,” Radoski adds.

Moving forward, Radoski says that TIC would be paying much more attention to and negotiate Federal Acquisition Regulation clauses related to “availability of funds,” which essentially provides legal immunity to the government in cases where funds are not available or allocated for a project.

Due to its past success, TIC is well-funded enough to make it through a shutdown of this length; however, Radoski says that other small businesses are “crumbling” and that even large, publicly-traded firms will likely post woeful financial quarters due to the hit their revenues will take as a result of the shutdown. “Worse yet, payments from December of 2018 are outstanding or have slowed because those who are needed to sign off on them have been sent home,” Radoski says. “So, TIC’s focus is on immediate delivery of commercial projects and maximizing the existing federal funded projects.”

Unfortunately, an end to the shutdown doesn’t appear to be coming anytime soon, as President Donald Trump and Congressional Democrats remain at odds over the allocation of funding for a wall along the U.S.-Mexico border.

SIA has joined other industry organizations in sending a letter to President Trump and members of Congress, urging both “to take immediate action to restore the full operation of the federal government, to limit harm to our industry and keep the economy moving forward,” Parker says. Specifically in the letter, SIA urges consideration of various compromises that have been floated by both Republicans and Democrats since the beginning of the shutdown: “Failing to seize on one of those compromises that can pass Congress and be signed into law is unacceptable,” the letter reads.

Mitigating the Impact of a Shutdown

Timothy Lozier, Director of Marketing for Valiant Solutions, which provides workforce management solutions to a variety of companies – including many security firms – says there are four things organizations must be aware of during a government shutdown in order to mitigate their risks:

1. Essential government contractors are required to work during a shutdown: TSA screeners – considered essential workers by the government – have been working for nearly a month without pay; however, increasing sick calls have led to abnormally long security lines at some airports and forced the closure of checkpoints at others. Still, “essential government contractors” must continue to have their employees report to their posts.

“Upon notification of the impending government shutdown, we received a memorandum via email from the (agency) stating that we must continue to perform our services to the agency notwithstanding the government shutdown,” says Lisa Dolan, Owner of Securit, a provider of both guard services and security system installation.  “All of our services under our respective contracts are either considered essential or an emergency or excepted activity and must continue.”  Additionally, Securit is also required to pay employees during the shutdown, but has been asked to hold off on invoicing the government.

2. Protect yourself with a line of credit: According to Lozier, most government contracts have a clause that requires the government to pay with interest when they are late on their payments; however, this does not help businesses in the short term, since they have to continue to pay their employees. During a shutdown, Lozier says the focus of businesses should be on ensuring they have a substantial line of credit they can tap into to help support their payroll.

3. Mitigate risk by diversifying your portfolio: Security firms that rely heavily on federal work will ultimately run a risk of lost short-term revenue in the event of a shutdown, Lozier says. Without a means to support the payroll, this can be a danger to smaller businesses. “Diversify your portfolio to include a good percentage of private-sector work so there is a healthy balance,” Dolan adds. “If all your work is in the federal arena and you are impacted by a lengthy shutdown, you could conceivably wind up behind the eight ball.”

4. Document your time and labor diligently: For those firms whose teams are required to work during a shutdown, Lozier says they need to make sure their time and labor management systems are documenting every shift and post to specific detail. This will go a long way in helping companies demonstrate what was worked, when and where.

Aside from implementing these steps, Lozier says companies need to consider taking action in the future to ensure they have the means to retain talent and build controls for their businesses to keep their doors opens and the lights on during any future shutdowns. “In the end, during a shutdown, the employees get paid – the contractor doesn’t,” Lozier says. “The risks in a partial government shutdown can really put a company in danger of increased costs and lost revenue.”

Joel Griffin is the Editor of SecurityInfoWatch.com and a veteran security journalist. You can reach him at joel@securityinfowatch.com