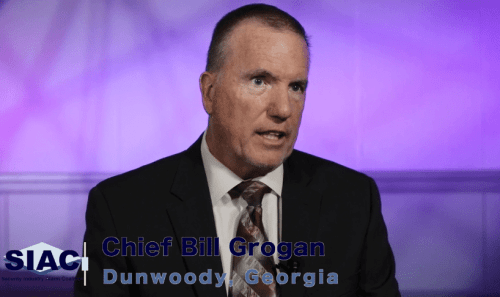 As Sandy Springs prepares to require verification before responding to security alarms, the Dunwoody police chief has appeared in an industry video against the practice. Two lawyers spoke out against the ordinance before the City Council, calling it “unsafe.”

The city’s attempt to crack down on false burglar and fire alarms includes fining alarm companies and requiring verification before responding. The city says it gets thousands of alarm calls a year, of which about 99 percent are false, tying up police officers and firefighters and costing enormous sums of money.

Verification requirements that go into effect June 19 require alarm companies to provide direct confirmation that a burglar alarm call is a real crime – with audio or video devices or in person – before calling 911.

“The bottom line is this is a dangerous ordinance,” Laddin said. “It signals to criminals Sandy Springs is open for business.”

The ordinance has been controversial with residents and alarm companies who say the practice could lead to increase burglaries because law enforcement response would be delayed.

The city has set up a long webpage defending the alarm ordinance. The city argues residents and businesses can easily comply with the verification requirements.

“Importantly, the technology for audio and video verification is available today, even for the individual homeowner to secure and place on his own,” the webpage says. “In fact, many alarm companies already offer these services.”

The goal of the verification requirements is to reduce the number of false alarm calls, according to the city. The city says security alarm calls are already a low priority because the amount of false alarms. Once verified, the response would actually be a higher priority and faster.

As the city prepares to put its verification requirements into effect, the police chief of its neighbor Dunwoody has appeared in a by the Security Industry Alarm Coalition backing its model ordinance, which Dunwoody uses.
SIAC, which supported an industry lawsuit against Sandy Springs that the city won, says its model ordinance has reduced false alarms for the cities that use it and has won the support of many police chief organizations. The model ordinance calls for fining citizens for false alarms and is against verification.

Dunwoody Police Chief Billy Grogan said in an email he helped implement the model ordinance when he worked for the Marietta Police Department and “was able to reduce false alarms significantly as have many other communities.” He participated in a SIAC video at the time about the model ordinance and agreed to be in the updated version released in January.

“In Dunwoody, we also implemented the Model Alarm Ordinance several years ago and have seen a significant reduction in our false alarms as well,” Grogan said.

Dunwoody requires registration and has escalating fines for false alarms that are billed to alarm system customers, like businesses or residents. Starting at $50 for the third false alarm, fines rise to $500 for 10 or more, according to the Dunwoody Police Department website.

Marietta Police Chief Dan Flynn, who serves as the alarm systems committee chair for the Georgia Association of Chiefs of Police previously said the group opposes requiring verification before a law enforcement response.

Laddin argued elderly people may not be able to afford verification equipment, and some people do not already have smartphone that can be used to connect with many of the security camera systems.

“It leaves the perpetrator with as much time as they want,” he said. “This is a serious, serious problem that doesn’t make sense.”

Jay Abt, who said he is a criminal defense attorney, asked Sandy Springs to reconsider the ordinance and instead implement higher fines like Atlanta or Dunwoody. Abt said he knows how criminals operate due to his career.

“I’ve probably met more burglars than people in law enforcement,” he said. “I know you are incentivizing publicly and telling them [Sandy Springs] is a great place to commit crimes.”