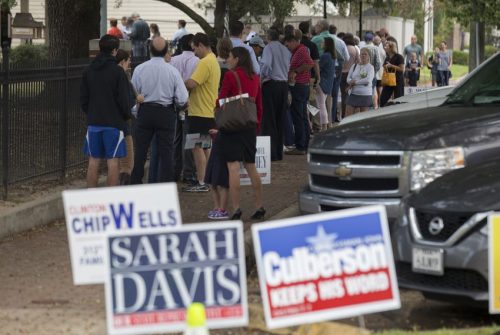 Historic turnout, unusually tight races and a “blue wave” that didn’t quite break.

In one of the nation’s closest-watched elections, Beto O’Rourke lost a tight race to U.S. Sen. Ted Cruz. But Texas Democrats celebrated the close margin.

“I am as inspired and hopeful as I have ever been in my life,” O’Rourke told a sprawling crowd of supporters in his hometown of El Paso.

Lower on the ballot, Democrats picked up several seats in the U.S. House, unseating U.S. Rep. Pete Sessions, R-Dallas, and U.S. Rep. John Culberson, R-Houston. That inches Texas’ congressional delegation toward the center, shifting the partisan split from 11-25 to 13-23. Texas also sent its first Latinas to Congress with the victories of Sylvia Garcia and Veronica Escobar.

“Tonight’s results have shown that we have the power to change the direction of our country — that’s what we did with this race,” Democrat Lizzie Fletcher said after unseating Culberson.

Gov. Greg Abbott sailed to re-election with a double-digit margin, easily besting his Democratic challenger, former Dallas County Sheriff Lupe Valdez, with 56 percent of the vote to her 43. But lower on the ballot, Texas Republican incumbents won with much narrower mandates than they carried in years past.

In 2014, Lt. Gov. Dan Patrick was elected with a double-digit margin of victory; this year, he won by just 5 points. The margins were similar for Attorney General Ken Paxton, who bested challenger Justin Nelson by 4 percent. Nelson consistently attacked Paxton, who has served the bulk of his first term under indictment for securities fraud — and that line of attack seemed to have seen some limited success.

Republicans maintained their dominant majority in the Legislature… but Democrats made serious headway, especially in the Dallas area.

Democrats picked up 12 seats in the Texas House, moving the lopsided 95-55 split to 83-67. State Rep. Matt Rinaldi, R-Irving, an important member of the Texas House Freedom Caucus, lost his re-election bid to Democrat Julie Johnson as a group of Dallas-area Democrats bested their GOP opponents. Moderates Tony Dale and Paul Workman were unseated as well. Those changes shift calculations for House lawmakers who will elect a new speaker in January. Democrats had been hoping that pickups in the midterm elections would boost their bargaining power — and they seem to have gotten their wish.

In the Texas Senate, incumbents Don Huffines and Konni Burton were unseated by Democratic challengers. But the GOP still holds 19 seats in the upper chamber — enough to bring legislation to the floor without any support from Democrats, and more than enough to pass it.

In 2016, a presidential election year, nearly 9 million Texans showed up to the polls. Midterm years tend to have far lower turnout — in 2014, for example, just 4.6 million Texans voted.

Many political observers attribute that boost to a blockbuster U.S. Senate race at the top of the ticket. Nationally, voters on both sides of the aisle were energized by President Donald Trump, with Democrats hoping the 2018 midterms would mark a sharp rebuke of the president and Republicans voting in droves to defend him.