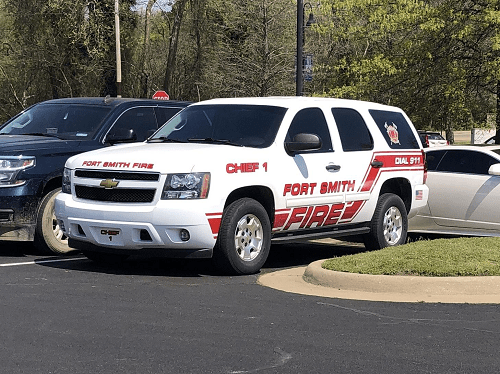 Fires, medical calls and the estimated cost of property involved in various situations are all on the rise. The Fort Smith Fire Department, however, is working to minimize loss and keep residents safe.

Fire Chief Phil Christensen told the Board of Directors Tuesday during his annual report presentation there were more than 11,300 calls for service in 2018.

“That’s someone calling 911 or an alarm being activated in the city of Fort Smith,” Christensen said. “Out of those numbers, we’ve responded 18,662 units, running an incident code somewhere in the city.”

Depending on the call, such as one of the 375 fires, there were multiple units sent to a scene.

Christensen discussed the slight uptick in fires, which he attributed to some occurring in older homes and the manufacturing processes of property inside homes.

Despite having approximately 40 more fires in 2018 than 2017, according to the incident summary provided in the board packet, the department managed to save 97.15% of all property. Christensen said it was estimated there was a total property value of $146.5 million and $4.2 million was lost, less than 3%.

Ward 1 Director Keith Lau asked how these figures were calculated. Christensen said the department estimates the value of the property and its contents. Then, it will estimate the amount of damage done to the home. Finally, that percentage is applied to the overall value of the home and the department could assess the total.

There was a 16% increase in medical calls, which make up the majority of all calls, Christensen said. The department, however, can now provide EMT-level service. This means its team is trained in patient stabilization, mobilization and can work with a licensed paramedic in the back of an ambulance.

There are 11 fire stations across the city with different units, such as aerial services, housed at different locations. Due to the locations, Christensen said there was an average response time of 3 minutes and 34 seconds.

“That tells me we have the right resources in place, our fire stations are in the correct locations,” Christensen said. “This is a number we look at on a daily basis.”

Christensen told the board as calls continue to increase and the city continues to grow, the department will evaluate its procedures and statistics to ensure it’s providing the best service and may recommend a 12th station in the future.

Firefighters and other first responders, such as the bomb squad, were outfitted with some of the latest technology. The department received $430,000 in grants for chemical meters, a portable X-Ray, mobile radios, a thermal imaging monitor and educational materials, among other items.

More than 50,000 firefighter training hours were put in last year and approximately 3,600 EMS training hours. Christensen said the fire training hours are significantly higher because of the situation; medical services work to save lives, he said, but firefighters are more likely to be injured or killed if they are not proficient in all skills.

Other ways to promote fire safety is providing safety lessons to organizations and schools and interacting with citizens in non-emergency situations. Firefighters in every station district are also familiar with the businesses present, knowing the contents of the building, layout and have pre-incident plans, Christensen said.

The department’s goals for this year, Christensen said, are to remain “vigilant, trained and ready to respond” to prevent or reduce fatalities and property damage.