Farewell to an Industry Pioneer 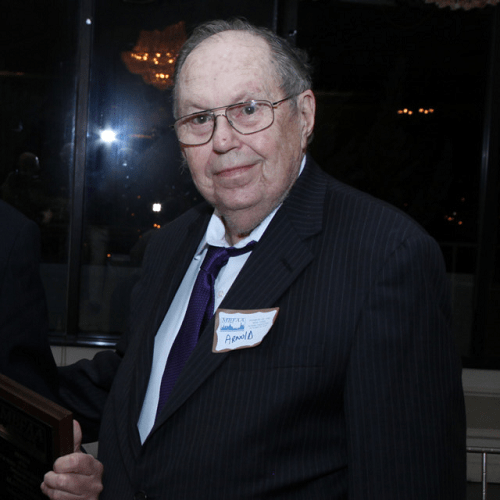 When we announced in January that this magazine was changing its name from Security Dealer to Security Business, one of the first emails I received was from Arnold Blumenthal, the man who launched Security Dealer as a monthly magazine back in 1978. “Much success on your new approach and new name,” it read. “I truly hope that your approach is as successful as we were in the early days of the industry.”

The security industry lost a legend and a pioneer this weekend, when Arnold Blumenthal passed away at the age of 91. He was laid to rest today in New York – the area where his influence over the security and alarm industry flourished for decades.

After proudly serving his country aboard the USS Yorktown in World War II, Blumenthal owned a New York-based alarm company for years before eventually finding his way into the publishing industry. Just last year at GSX, Alan Forman – now President of New York-based Altronix – told me (and a room full of other people) about how he, Arnold, Alan Glasser and others ran flourishing New York security businesses – and in the process formed the foundation of the area’s alarm industry.

“Alarm technology 30 years ago was just beginning to move from using foil on windows to passive infrared detectors and other electronic motion sensors,” explains Susan Brady, former Editor of Security Dealer, who first met Arnold in 1989. “If this seems archaic by today’s standards, back then there was another relic who had already spent 20 years in the security industry…and he had some wild stories to tell.”

Over the course of more than 30 years, Arnold oversaw the publishing of Security Dealer and was a major figure in our company’s security publishing group for decades. He was also, along with Glasser, a key figure for the Metropolitan Burglar and Fire Alarm Association of New York, the state’s oldest incorporated alarm association with some of the oldest companies and oldest members in the industry. He also helped establish the New York Low Voltage Contractors Association (NYLVCA) in 2007.

“Arnold and I knew each other about 40 years – not only as an alarm business associate but truly a friend and a mentor,” Glasser says.

“I first met Arnold at an ISC East show in New York back in 1986, and Arnold just owned the floor – he was the ‘King of New York’ and regularly held court at the Security Dealer booth,” says Steve Lasky, our Editorial Director. “At the time, the security industry was very much New York and east coast-centric, and Arnold was a major figure. I always viewed him as the gregarious, albeit disheveled magazine publisher who loved his industry and loved publishing even more. Little did I know that in about 10 years I would be working alongside him…Arnold was extremely gracious in helping me adjust. He was in his mid to late 60s when I joined the team, and I swear he never slept.”

“Arnold, always the quintessential New Yorker, took me under his wing and we established a great relationship as I grew in my role from sales rep to publisher of his pride and joy, Security Dealer magazine,” says former Security Dealer Publisher Peter Harlick. “I always kept Arnold close to get his expert opinion. He seemed to always know what our readers wanted. Arnold’s friendships were many, his experiences were vast, and his stories were endless. Today, I work for Dell Technologies in data protection, but often find myself thinking of Arnold and what he may be thinking up next to better serve his readers. It was truly an honor to learn from him.”

Blumenthal served on the Board of Directors for New York-based NAPCO Security Technologies for more than 15 years. “Arnold Blumenthal was a great friend of this industry, NAPCO and mine,” says NAPCO VP of Marketing Judy Jones. “A humble, proud husband and family man, he was a lifelong fighter for all the things that mattered: He fought for his country, he fought cancer, he fought to protect the elderly in the county law center, and he fought to help pioneer and shape the security industry for decades. He will be truly missed.”

As a proud WWII Veteran of the USS Yorktown, Blumenthal’s family has asked that any donations be made in his name at www.ussyorktown.org. Alternatively, a check can be written to the USS Yorktown Association and be mailed to PO Box 1021, Mt. Pleasant SC 29465. Please leave a note in memo portion of the check.

“Arnold’s contribution to the security industry and Security Dealer is unparalleled,” says our current group Publisher Nancy Brokamp. “While he will be missed, I don’t know anyone who doesn’t have a warm, smile-filled memory that will forever keep him present in our hearts.”

I met Arnold Blumenthal back in 1979, when he was running ‘Security Dealer’ magazine. It quickly became clear that he knew everything and everyone in the industry, usually first – and that never really changed to this date. He was always kind, genuine, extraordinarily insightful, and a valued resource for me and for NAPCO as the company grew. Many many years, products, trade shows, dinners and meetings later, it was only natural that when an opening occurred in 2001 on the NAPCO Security Technologies Board of Directors, I called Arnold. He served the Board, this industry and as my friend, with good humor, keen knowledge, integrity and professionalism. I will miss him, as will we all.

From Ron Davis, of Davis Mergers and Acquisitions Group, Inc.:

Thank you, Paul… for remembering my good friend, Arnold Blumenthal. I was so saddened by his passing, and then I read your column/testimonial and thought about my experiences with Arnold, and there were many.

Back in the early 70s, I was consumed with what I considered to be a singular task, that is of providing quality sales and marketing training to the alarm industry. Just reading that last sentence reminded me of my overblown opinion of what I was doing, but fortunately, no one told me that I couldn’t do it. And for years I struggled building a business of providing seminar education to anybody who would listen, and was a regular speaker at virtually all the industry trade shows. Arnold was at many of them, and it seemed as though every time I came in to speak, he would be sitting in the back row of the room, puffing away on his obligatory pipe, just waiting for me to start coughing and pleading with him to stop smoking while I was speaking. This time, it came about towards the end of the seminar, and he came up after me with a big smile on his face and said “don’t worry Ron, someday they’re not going allow people to smoke in hotels and restaurants!”. Never thought I would live to see the day, and I certainly never thought Arnold would live to see the day because I knew he was older than me. I really didn’t know he was a decade older than me! And then he smiled, asked where I was from, and I told him that while I was raised in Chicago, I was originally from Brooklyn. I think it was at that moment I became lifelong friends with Arnold and somehow adopted Alan Glasser and Alan Forman along with assorted other characters that were in Arnold`s circle. And from that time on, I never saw Arnold when he didn’t yell out “landsman” (you would have to be from New York to understand what a compliment that was).

Later, towards the end of 2002, he asked me if I would be willing to join a group of industry professionals who are going to be SECURITY DEALER Magazine icons of 2003, celebrating the 25th year the magazine had been in existence. The plaque, with the group (minus me… Illness in the family) photo and Arnold’s picture still hangs on my office wall. And later, I went on to host two homecomings of alarm dealers for Alan Glasser and the MBFAA .

Arnold was one-of-a-kind, truly an icon. I will miss him. I will think of him often. And when I do, those pleasant memories will remind me not just of the beginning, but all the things that have transpired in the last 50 years that I’ve been in the industry. Rest in peace, Arnold. You left your mark on an industry that will miss you.

Twenty years my senior,  Arnold and I would discuss his Navy service aboard the aircraft carrier Yorktown. Yorktown was commissioned in April 1943, and participated in several campaigns in the Pacific Theater of Operations, earning 11 battle stars and the Presidential Unit Citation. Arnold was proud of that. Arnold was my go-to for life experiences. We discussed everything from love, marriage, living, dying, and health. I still have his note on my desk about Hemp Oil he recommended. Arnold my friend, it’s your time now to rest in peace.

Arnold’s dedication, together with his keen insight, knowledge and wit helped foster the explosive growth and professionalism of our industry.  In addition to his talent and contributions, he was engaging and funny, although he had a no-nonsense attitude when it came to the truth. The simplest way to put it is that Arnold was the real deal – an extremely humble human being- the consummate Mensch.  Arnold was both a mentor and friend for almost 40 years and I always addressed and referred to him as “Uncle Arnold“.  He will be sorely missed.