Facial recognition may help you get on a plane or cruise ship faster. Should you worry about your privacy? 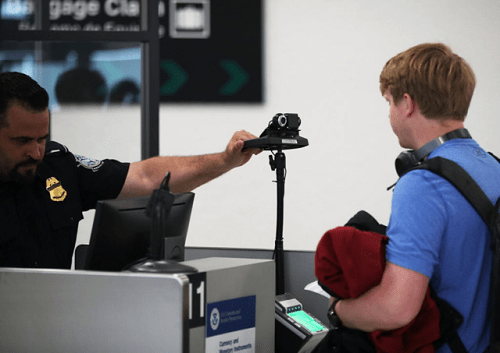 A U.S. Customs and Border Protection officer instructs an international traveler to look into a camera as he uses facial recognition technology to screen a traveler entering the United States on February 27, 2018, at Miami International Airport in Miami, Florida. (Joe Raedle/Getty Images/TNS)

New 3D face capture technology scans faces of travelers leaving ships and instantly verifies their identities by matching the scans with images collected at the beginning of cruises.

Step this way, instead. Look into the camera lens and off you go.

Sound convenient? Technology companies working with travel providers and the federal government to install facial recognition systems at airports and cruise terminals hope you think so.

But privacy advocates don’t want you to become too comfortable. They worry that what we’re willing to accept for convenience sake today will soften our resistance to the idea of filling public spaces with cameras that can identify us and track our every move.

In South Florida, facial recognition systems are popping up at airports and seaports:

At the new Terminal 25 in Port Everglades, passengers heading for their Royal Caribbean cruises can breeze through check-in and boarding if they pre-registered at home, thanks to a system developed for the cruise line by California-based biometrics developer Tascent.

In its announcement heralding the system’s debut in November, Tascent called it a “next-gen biometric traveler experience” that enables “frictionless arrivals.”

At PortMiami, Royal Caribbean worked with another provider, IDEMIA, on a facial recognition system used to speed debarkation, the process of getting people off the ship. IDEMIA’s MFace high-speed 3D face capture technology scans faces of travelers leaving ships and instantly verifies their identities by matching the scans with images collected at the beginning of cruises.

Testing of the system at PortMiami and Cape Liberty in New Jersey, announced in 2017, is complete and the system is “now moving into commercial production at these ports,” an IDEMIA news release stated.

The release quoted Capt. Thomas Hinderhofer, Royal Caribbean’s director of northeast port operations, as saying the cruise line has received “very positive feedback” on the new system. “Innovative solutions that improve our guests’ total experience — including the final step of clearing Customs in a fast, secure, frictionless process — is Royal Caribbean’s way of the future,” he said.

Miami International Airport launched a biometric entry pilot program in November 2017 at its renovated Concourse E facility that’s capable of screening up to 10 passengers a minute — reducing passenger wait times by 20 percent to 80 percent, the airport said on its website. The system works by comparing travelers’ scanned facial images to images on their passports.

At the airport’s Gate J17, Lufthansa fliers can forego boarding passes entirely and present just their faces. Additional airlines are expected to get the technology this year.

The new programs join other biometric scanning technologies, such as CLEAR, which identifies passengers using eye and fingerprint scans. That technology, which requires pre-enrollment, enables passengers to skip the document presentation line, but not the physical Transportation Security Administration inspection line. CLEAR is available at 28 U.S. airports, including terminals E and H at Miami International and terminals 1 and 2 at Fort Lauderdale-Hollywood, for $179 a year.

A free version is available to travelers at participating stadiums and sports arenas, including American Airlines Arena in downtown Miami.

Systems that scan fingerprints or eyes aren’t as threatening as facial recognition systems, which can identify and track people with cameras installed throughout the public realm, including atop buildings, utility poles, street signs and traffic signals, privacy advocates say.

Travelers can opt out of participating in the biometric checks and proceed through their check-in by presenting traditional documents, according to the U.S. Customs and Border Protection, which is overseeing programs involving international travel.

IDEMIA says no images used by its MFace technology to speed cruise ship debarkation will be stored after trips are completed.

And the Customs and Border Protection says it retains images of U.S. citizens and exempt non-citizens no more than 12 hours after their identities are verified. Images of non-citizens can be retained up to 14 days except under certain circumstances required by law. Images that fall under those exceptions will be retained by the Department of Homeland Security “as a biometrically-confirmed arrival or departure from the United States.”

Even if travelers’ photos are deleted after they return to the U.S., federal and state agencies retain photos of citizens’ passports, visas and driver licenses in their databases that could used at any time to identify faces recorded by surveillance cameras.

That’s the capability that worries privacy advocates, such as the Electronic Frontier Foundation and American Civil Liberties Union.

Faces also are photographed by police body cameras, the ACLU pointed out in a letter last year urging Amazon to stop licensing its surveillance system, Rekognition, which can recognize persons of interest in real time, to law enforcement agencies.

“People should be free to walk down the street without being watched by the government,” the ACLU said in the July letter. “Facial recognition in American communities threatens this freedom.” Amazon continues to market the product to police agencies, CNBC reported in December.

What makes facial recognition different from other biometrics “is that it’s very easy to collect from a person without their noticing,” said Adam Schwartz, an attorney at the Electronic Frontier Foundation in a story published in The Hill in December 2017.

The story pointed out that the FBI already has 412 million images in its facial recognition database to which surveillance cameras can be easily linked if the government chooses.

We’re more likely to accept that choice if we first learn to appreciate facial recognition as a time-saving convenience, Schwartz told The Hill.

“There’s a fear we have of increased normalization of this,” he said. “Once people start doing facial recognition on an airplane, they’ll get used to it in a supermarket. And then all of a sudden our lives become more and more on display.”