Elderly Oklahoman agrees to second contract for service she already … 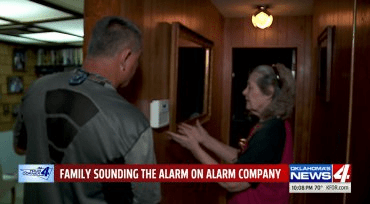 She won’t owe a dime to the company now.

Remember, Shera has memory loss and was home alone earlier this year, when a couple of door-to-door salesmen from alarm company, Alliance Security, convinced her to switch her alarm system when she was already under contract with a second alarm service company.

Shera’s son, Darren, is her care giver and power of attorney, and claims his mom didn’t understand what she was agreeing to.

“This bill coming every month and them threatening they’re going to ruin her credit has really set off her anxiety,” Darren said.

Alliance, the company that sold and installed Shera’s alarm system turned around and sold her contract to a second alarm company, Safe Home Security and they were the ones trying to get paid.

Safe Home claims the alliance salesman and the rep who confirmed the sale over the phone, had no way of knowing Shera suffers from memory loss because she was so clear with her answers.

Shera’s family was able to prove her medical diagnosis and that she was already under contract with a second alarm service company.

Safe Home’s Corporate Account Director said he was already in the process of “obtaining the correct information in order to make the correct decision, but “without the documents as proof” they didn’t have enough information to act.

Once they got what they needed, they acted fast zeroing out Shera’s account, and waiving her outstanding balance.

Shera’s now back with her old alarm service.

We were able to confirm through the Department of Labor that the Alliance salesman and installer handling Shera’s system both have their Oklahoma license.

Now that Shera is out of her contract the state has closed its investigation.

Elderly Oklahoman agrees to second contract for service she already has

10.30.18 – kfor.com – Midwest City, Okla. –  Watch Videos
81 year-old Shera was home alone the other day when a couple of door-to-door salesmen from alarm company Alliance Security landed on the front porch.

Shera’s son, Darren, who is also his mom’s caregiver and power of attorney, said Alliance swapped out the old equipment with one of their systems after getting her to agree over the phone to a second contract with Alliance.

“I didn’t know what I was supposed to do anyway,” Shera said. “He just said ‘This man is coming in, my headman or whatever you call him, and go over there and start tearing it up.”

“It’s an older lady by herself, and she’s calling us at the time, trying to understand what’s going on,” Shera’s son said.

The Oklahoma Department of Labor regulates alarm and locksmith companies.

“It’s about making sure they are registered in the state of Oklahoma, they have the proper insurance, they are following the proper rules,” Houston said.

We know the new alarm system was sold and installed by Rhode Island-based Alliance Security, which is fully licensed to be doing business in our state.

Here’s where it gets confusing.

The company that keeps sending Shera letters for payment for the new alarm system is a completely different company, Safe Home Security, out of Connecticut.

Safe Home is not a licensed Oklahoma alarm company.

Its vice president of sales told the In Your Corner team they purchased Shera’s contract from Alliance after the sale, which is perfectly legal, and since they’re only billing for services, they don’t need an Oklahoma license.

“This bill coming every month and them threatening they’re going to ruin her credit has really set off her anxiety.”

Safe Home’s VP of sales said he’s happy to release her from the contract but only after she proves her medical diagnosis and that she was already under contract with a second alarm service company.

He also claims a recording of the sales call proves the Alliance rep was patient with Shera and had no way of knowing she suffers from memory loss.

The rep can be heard asking Shera if she feels comfortable entering into the agreement on her own and Shera responds with a, “Yes, ma’am.”

Like Shera, hundreds of more unsatisfied customers filed complaints against Safe Homeand Alliance online and with the Better Business Bureau.

In 2007, the Connecticut Attorney General’s Office sued Safe Home Security and its owner for violations, like unfair billing and collection practices.

Back on Oklahoma soil, Houston said her enforcement officers are already looking into the matter.

“I think the most valuable piece is getting her out of the contract,” Houston said.

The In Your Corner bottom line:

In 2014, the Connecticut Office of the Attorney General entered into a settlement agreement with Safe Home Security to resolved the state’s lawsuit against the company. Since entering the agreement, AG’s office said it’s received more than 325 consumer complaints and is currently reviewing the state’s options in response to the complaints.