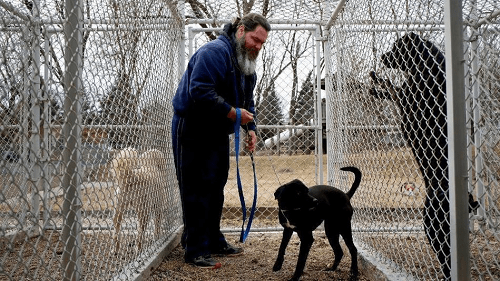 “My goal is to try to make sure that people’s animals, who to most dog lovers are like family members, have legitimate protection in facilities that might not be manned on a 24-hour basis,” said Sen. Donald DeWitte, R-St. Charles.

Bully Life Animal Services, which occupied a kennel building just outside West Chicago, had a fire break out in the early morning of Jan. 14. Owner Garrett Mercado said he had left the property to give a ride to a friend, and when he returned the building was in flames.

The kennel did not have a sprinkler or an alarm system — just battery-powered smoke detectors, the only fire prevention feature the state requires in buildings that house animals.

Rep. Diane Pappas, D-Itasca, said that minimal standard is “a flaw in the law” that requires a fix. Her bill calls for kennels to install automatic fire notification systems, which she said could be similar to what home security companies offer.

“If someone is operating a business, charging (people) to take care of their pets, this is the least they should be doing,” she said. “ … I don’t see this being a cost-prohibitive measure.”

DeWitte’s bill calls for kennels that are not staffed at all times to have “a fire sprinkler or other fire suppression system.”

But in a phone interview, he said conversations with animal welfare advocates convinced him to allow alarm systems as an alternative.

“I hope all the interested parties engage in the discussion,” he said. “I’m not trying to push something down a business owner’s throat.”

Kennel owners interviewed by the Tribune had varying opinions of the proposals. Jeff Ironside, owner of Amusement Bark Dog Day Care in La Grange Park, said his facility already is staffed around the clock, and has an alarm that is tied into the local fire department.

He added, though, that retrofitting a building with sprinkler systems could be far too costly for the average kennel owner. When he looked into sprinklers at a former location, he said, he was quoted a price of $40,000.

“If somebody were required to put in sprinklers, that would be really cost prohibitive,” he said.

John Marek, of Happy Paws Pet Resort in Carol Stream, said sprinklers would cost his business up to $20,000, and he thought a fire alarm system that automatically alerts first responders would also be pricey.

He said he already has internet-enabled smoke and carbon monoxide detectors that alert his cellphone if there’s a problem. More expensive fixes could be too much for many operators to handle, he said.

“This is not a high margin business,” he said. “We would have to raise our rates to do that. It’s not a bad idea, but it’s something (legislators) need to take into account.”

He said a better solution would be to focus on the Illinois Department of Agriculture, which is in charge of inspecting and licensing kennels. Budget cuts have meant that inspections have become less frequent, he said, so unsafe facilities can go undetected no matter what the regulations say.

Morgan Booth, spokeswoman for the Department of Agriculture, said fire safety is a matter for local building inspectors, not the department, and that it actually has one more kennel inspector than it had five years ago.

Still, only seven inspectors are tasked with monitoring the state’s 855 kennels.

“The goal is (to inspect) annually,” she said. “However, that is dependent on additional investigations, such as humane care complaints, that are filed and need to be investigated.”

Sue Aikman, owner of Addison’s Bellyrub Klub, said the state’s “very minimal inspections” are indeed an issue, but she had no problem with paying to improve fire protection.

She said when she bought the building that houses her kennel five years ago, the village required her to install both sprinklers and fire alarms. It cost her $80,000, but she viewed it as a worthwhile investment.

“It’s important for the parents,” she said, referring to pet owners. “They need to have peace of mind that someone is looking out for their dog.”

Pappas’ bill, which is before the House Labor and Commerce Committee, could be considered as soon as Wednesday. DeWitte said his bill should have a hearing in the Senate Agriculture Committee next week.