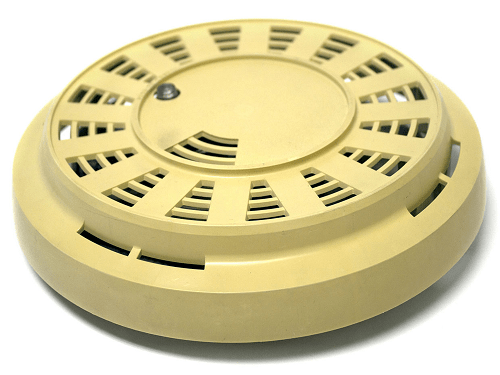 Circle of Life: BRK’s first battery-operated smoke detector for residential use was released in 1976, a year after its main rival, Statitrol, got a similar product to market The race to create the modern residential smoke alarm began in earnest in the mid-1960s, not long after Duane D. Pearsall founded a company called Statitrol to sell heating and ventilation equipment. In 1963, a chain-smoking Statitrol technician exhaled cigarette smoke toward an ion generator, causing an ionization detector to spike. Similar phenomena had been reported as early as the 1930s. But this time, something big would come of it: Statitrol engineers immediately began devising a smoke detector that would exploit the phenomenon.

As is so often the case with technology, the pioneer, in this case Statitrol, would not be the one to reap long-lasting commercial success. In the end, most of that went to its main rival, BRK.

The construction of an ionization-type smoke detector involves placing a small amount of radioactive material (typically americium) in a tiny chamber between a pair of electrical plates. As the radioactive material decays, it releases energetic particles that ionize air molecules and set up a current between the charged plates. Smoke that enters impedes the current, tripping the alarm.

Ionization detectors were a big improvement over the previous technology, which detected heat rather than smoke and typically didn’t trigger an alarm until the area where the detector was mounted was aflame. Smoke, of course, typically spreads far faster than flames, so an ionization detector is much more likely to sound the alarm in advance of the spread of flames, providing critical additional seconds or minutes for escape.

The technological implementations weren’t sophisticated, but using radioactive material in a consumer item was a big deal at the time. The Atomic Energy Commission (now the Nuclear Regulatory Commission) had to approve all commercial use of radioactive elements. The AEC okayed smoke detectors for commercial properties in 1963, but didn’t green-light them for residential use until 1969.

Statitrol may have had a head start, but BRK claims to have beaten it to market with a battery-operated residential smoke detector. According to BRK, a model it commercialized in 1969 was the first such product to earn approval from Underwriters Laboratories (UL), the world’s most prominent safety-certifying agency.

The whole point of that product seems to have been to secure a UL listing, however. And there were yet more regulatory hurdles to get over. Residential building codes had provisions only for smoke detectors connected to mains power. It wasn’t until 1974 that the National Fire Protection Association revised its NFPA 74 standard to support the installation of battery-operated models. BRK may have had a battery-operated model in 1969, but as of 1975 it was still pitching its AC models in ads.

In 1975, Statitrol began mass-producing what is widely regarded as the first practical battery-operated ionization-type smoke detector for the residential market, the SmokeGard 700. By the end of 1975, a little under 10 percent of all U.S. homes had a smoke detector.

That year, the National Bureau of Standards (now the National Institute of Standards and Technology, or NIST) began a project to evaluate smoke-alarm technology. That project, known as the Indiana Dunes tests, concluded in 1976. Even before it was finished, the results were conclusive: smoke detectors would save lives.

Around the same time, several technological advances were being incorporated into smoke detectors, “including solid-state circuitry…more effective sensing and alarm sounding, and the option of AA batteries in some models,” according to the Safe Community Project, a nonprofit dedicated to fire safety and run by active and retired firefighters and medics.

By the early 1970s, with smoke detectors obviously on the cusp of being a big business, GE, Gillette, and Norelco entered the market. In 1976, BRK commercialized its first battery operated detector for residential use that carried the First Alert brand name.

The timing couldn’t have been better, because the U.S. government and independent safety agencies were all then touting the results of the Indian Dunes study. In 1976, the National Fire Protection Association Life Safety Code “required” that all U.S. homes have smoke alarms (technically this was a recommendation; the Life Safety Code is very influential but does not carry the force of law).

Though the new market had spawned half a dozen competitors, at least, BRK enjoyed two big advantages. It had been doing business with electrical contractors all along, so it had a channel into the home-builder market. As important, if not more so, was the distribution deal it had signed in 1974 with Sears, then the single most important national retailer of tools and do-it-yourself equipment in the United States.

With regulations and technology coming together, sales of smoke detectors took off, going from what NIST calls “token usage” through 1975 to reach millions of homes in just a few years. The share of U.S. residences with smoke alarms doubled to 20 percent by the end of 1976, and by 1990 roughly 90 percent of all U.S. homes had at least one. Since 1992 the figure has been roughly 95 percent. BRK First Alert was an early success, and it’s been among the sales leaders ever since.

The number of deaths in fires has been on a continuous downward trend for at least 100 years. The rate of reduction diminished through the 1950s and 1960s, however, before plunging again thanks to smoke detectors. The death rate was cut by half between 1975 and 2000. According to the Consumer Product Safety Commission, a U.S. government agency, there are about 300,000 residential fires each year, leading to approximately 2,000 deaths. Two-thirds of those deaths occur in homes lacking smoke alarms or with nonfunctional alarms.

BRK is now a subsidiary of Newell Brands, in Hoboken, N.J. And Statitrol? It was sold by founder Duane Pearsall to Emerson Electric in 1977. It is no longer in business.