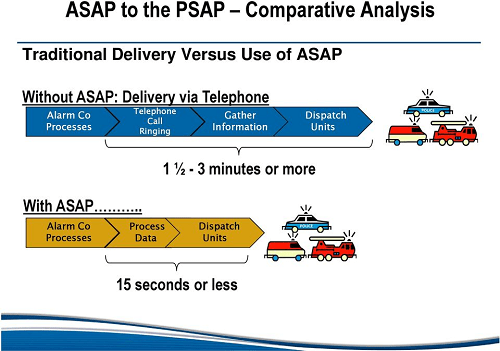 The implementation aligns the city with the rest of Hamilton County, which went live with ASAP in July.

ASAP was developed in partnership between The Monitoring Association (TMA) and the Association of Public Safety Communications Officials (APCO), with Vector Security President and CEO Pam Petrow co-chairing the committee. Vector Security was the first alarm company to debut ASAP in Richmond, VA in 2012.

Vector Security assisted with implementation in Cincinnati by helping to conduct extensive testing prior to the system going live.

“We are pleased to be able to reduce call processing times to provide quicker and more accurate emergency response to Vector Security customers in the area who are served out of our local Cincinnati branch,” said Anita Ostrowski, Vice President, Central Station Services, Vector Security.

“As a security provider, we continue to actively seek ways to promote ASAP’s value to municipalities and public agencies, and help other alarm companies implement it for the greater good of the industry, as well as for the increased safety of our communities,” she added.

The use of ASAP results in the following benefits for monitored alarm users and first responders:

With ASAP delivering alarm notification information directly from the alarm monitoring centers to PSAPs via computer rather than by phone, all pertinent data goes directly to first responders and the process takes only about five seconds. Many agencies using ASAP can expect alarm response times to potentially drop to as little as 90 seconds or less.

According to Bill Hobgood, the consultant who managed the Cincinnati ASAP implementation, “Cincinnati emergency communications officials are thrilled with the ASAP go-live. The day after we went live, an area of Cincinnati experienced a power outage that normally would have resulted in a barrage of calls coming into the call-taking queue from alarm companies calling in alarms via telephone. But because ASAP completely bypasses the call-taking process with no telephones involved, there was no backlog the following morning during this outage. One official noted that the ASAP implementation was one of the smoothest projects implemented at the city of Cincinnati’s ECC.”

Nationwide, more than 85 agencies have implemented, or are in the process of implementing ASAP. For a current list: https://tma.us/asap/.

For more information on the benefits and features of ASAP, visit www.vectorsecurity.com/asap.