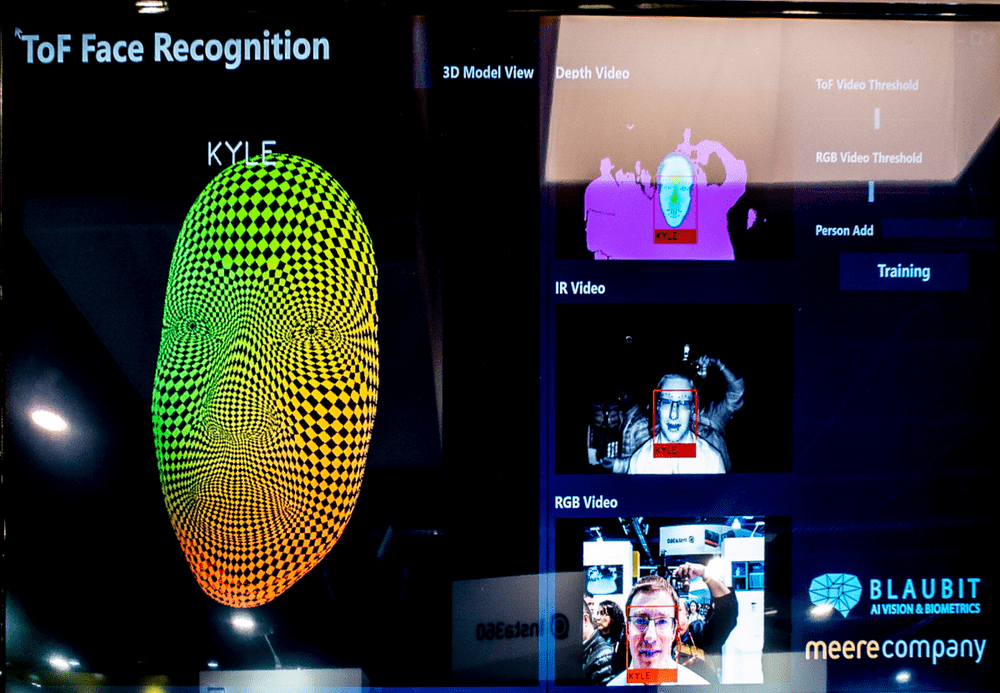 The Meere Company demonstrated a wide range of ToF video surveillance cameras at CES 2020 performing functions like short-range object recognition and facial recognition as far as 14 meters away.

1.9.20 – SIW – The expanding meaning of IoT and AI converge to create new possibilities

LAS VEGAS – The Central, North and South Halls of the Las Vegas Convention Center, once able to hold all CES exhibits, now greets attendees with broad strokes of technology advances in categories like intelligent displays, surveillance detection and user experience categories.  The common theme across all CES2020 venues in Las Vegas is that the Internet of Things (IoT) has moved to the Internet of Intelligence or Artificial Intelligence of Things (AIoT).

Combine AI (our new, evolving brain) and IoT (our growing digital nervous system), you get AIoT—the artificial intelligence of things.

Last year, the security industry was like an enhanced nervous system of devices and receptors, often playing the iconic saying, “if I only had a brain.”  This year, much to the joy of global consumers and industrial end-users, we finally have our brain, and privacy advocates like the Electronic Frontier Foundation are not happy.  No matter, advancements in artificial intelligence for specific tasks has advanced to the point of great viability to save lives and costs, and the crowds around the CES Innovators are a demonstration of the trust held with our new guardians of trusted data.

From video surveillance through optical detection sensors to facial recognition by the new breed of Time-of-Flight (ToF) sensors, CES attendees “want to see technology and something fresh,” Marcus Yang, chief executive of camera start-up Amaryllo, says. “They’re only interested in looking at your cameras and what kind of features they have.”

Yang says he’s had a difficult time persuading customers to pay more for safeguards such as faster processors to enable end-to-end encryption when an array of cheaper but less secure options are available.  Could it be that faster detection of weapons and faces is a greater priority than cybersecurity?  This has been my opinion for years as most CISO’s are already accounting for intrusion prevention in their over-arching infrastructure.

The Meere Company demonstrated a wide range of ToF video surveillance cameras performing functions like short-range object recognition and facial recognition as far as 14m (see photo above).  These cameras are the size of three U.S. quarters and can be placed in “legacy” surveillance camera housings, doors, gates, robots, speakers, Unmanned Ground Vehicles and mobile devices.  They essentially replace the “normal” surveillance camera in a hallway or entry door with a sensor aimed at identifying people and objects, at a tenth of the cost.

There’s been some pushback, at least on facial recognition and other surveillance technology from China. Hikvision and IFlytek, two Chinese tech companies that showed off their artificial intelligence at CES 2019, now face U.S. export restrictions as previously reported .

For the first time, CES attendees can use their face to pick up their event badges, says Gary Shapiro, CEO of the Consumer Technology Association, which organizes CES.

“We’re experimenting with it, attendees have a choice; You’re opting in,” he explains. “If you want to do it, you’ll have an opportunity to do it.”

Venture capitalist Rajeev Chand, who is moderating one of the privacy in technology panels, says tech companies are getting better at seeing themselves as custodians, not the owners, of user data.

Sunflower Labs has a “home drone security” system. If trespassers step onto your lawn, a camera-equipped drone flies out from its resting place to look at them and streams the live video to your phone, less intrusive as it’s looking down only at your own property.

But what if you really wanted a solution to identify friendly drones from potential eavesdroppers, or worse yet, airfield drone terrorists? The Drone Racing League is gaining so much popularity that drone enthusiasts now have safe enclosed stadiums to enjoy their sport safely.  The drone operators left over now can use WhiteFox Defense’s WISDM Drone Identification module and be in compliance with the FAA’s new Remote ID requirements.

Current air traffic management must adapt with the growing needs of drones—the FAA predicts seven million drones will be in the U.S. airspace by 2020. UTM is still being developed, but can be imagined as a set of services that create a safe and trusted framework for drones to operate. Unlike traditional air traffic management, UTM will be completely digital and mostly autonomous.

How will secure Remote ID affect you?  If you have a package being delivered by a drone, it’s imperative your privacy and property is safe. Similarly, when drones fly over your neighborhood, you need to trust the intent isn’t malicious. As with any new technology, drones have the potential to be used dangerously. With WISDM, both the owner of the drone and the society in which it operates can be confident its safe. In a system that doesn’t prioritize security, we’re unable to trust what flies above.

A truly innovative and compact drone detection solution for the airport manager, stadium security manager or industrial end user is the Scorpion 2.  Smaller than a digital voltmeter, the user can detect numbers of “friendlies (UAS)” and unknown UAS devices, with a simple second function to auto mitigate or automatically and safely land an intruding UAS device.  All operational status may be logged with DroneFox from a command center.  This solution combines passive detection with safe, non-kinetic drone mitigation, a leap forward in this solution category.

Steve Surfaro is Chairman of the Public Safety Working Group for the Security Industry Association (SIA) and has more than 30 years of security industry experience. He is a subject matter expert in smart cities and buildings, cybersecurity, forensic video, data science, command center design and first responder technologies. Follow him on Twitter, @stevesurf.