Bill would lower Maryland sales tax, but expand it to cover services 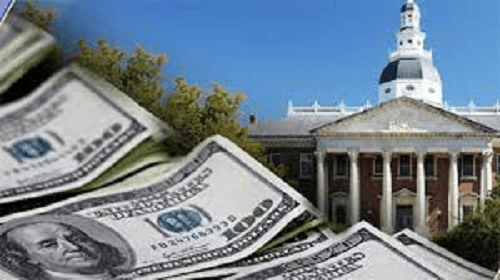 Intent of bill is to fund Kirwan Commission school recommendations

Maryland lawmakers are considering a proposal to cut the state sales tax by a percentage point — but expand it to include services.

The proposal would lower the sales tax from 6% to 5%, but expand it to apply to professional services.

The expansion of the sales tax is expected to generate $2.6 billion to pay for an overhaul of the state’s education system. So far, the bill is getting a lukewarm reception from Democratic leaders in both the House and Senate.

“The bottom line is, it’s one way we can fully fund our schools,” said the bill’s sponsor, Delegate Eric Luedtke, a Democrat who represents Montgomery County’s 14th District.

“It’s not ever going to happen while I’m governor,” Gov. Larry Hogan said.

The bill was proposed in an effort to pay for the Kirwan Commission’s recommended overhaul of the state’s public school system.

The National Federation of Independent Business also opposes the bill.

“The cost of doing business in Maryland will go up, plain and simple,” said Mike Halloran, state director of the NFIB.

Senate President Bill Ferguson said the day before the session started that the General Assembly would consider overhauling public education without tax increases.

“I think there are a lot of ideas on the table and we will have to see where things land,” Ferguson said.

The tax would not apply to food, medicine, educational, social services or the nonprofit sector.