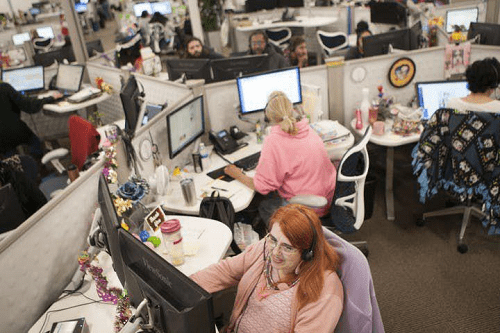 The man at the other end of the phone line was confused. But Daina Blackmon calmly probed for signs of trouble.

On her screen she could see basic details — name, age, location, and whether he had had a recent history of falling or other medical emergencies. It quickly became apparent that he had accidentally pushed the alarm on a special flip phone.

That triggered a safety call by an operator at GreatCall, a newly owned Best Buy company that sells mobile devices and support services to help older adults live independently.

Most calls Blackmon and her GreatCall colleagues receive aren’t medical emergencies. But if they are, the specially trained team can dispatch paramedics, family or neighbors to the customer’s home, staying on the line as long as necessary. More often than not, they spare everyone a costly and unnecessary trip to the emergency room.

As the nation ages, technology holds promise to help older adults stay in their homes longer and relieve some stress on family members concerned with their safety. The demographics also present enormous business opportunities, which is why Best Buy Co. Inc. spent $800 million in cash in October to purchase GreatCall.

The acquisition, the largest in Best Buy’s history, launched the nation’s No. 1 consumer electronics retailer deeper into the health care marketplace, where it has been dabbling with its own products and services in recent years.

Best Buy gained access to about 1 million GreatCall customers, along with an experienced call center operation and a diverse portfolio of devices tailored to older adults — including simple flip phones with large buttons and extra bright screens, wearable alert devices and a line of sensors for high-risk seniors that monitor daily activities at home.

“Since becoming part of Best Buy, there’s just been so much more interest coming from large companies who think that what we’re doing now is just that much more scalable and interesting having Best Buy resources behind us,” GreatCall CEO David Inns said.

Ramping up the business

Best Buy has formed a new division with its own president and added two veteran health care executives to its board of directors.

With Best Buy’s deep pockets, the GreatCall purchase didn’t strike most investors as overly risky, and analysts have so far greeted it as a savvy long-term play.

The retailer said the deal won’t affect earnings either way over the next two years, with meaningful profits expected by fiscal 2021.

“A lot of people just want to make sure their parents are safe, and in some ways technology can help address that,” said Piper Jaffray analyst Peter Keith. “But it’s hard to put together a full suite of products and services. That’s where Best Buy, with store associates as its core assets, can educate and recommend the best technologies — and furthermore step in to provide ongoing support.”

Demographics explain why. There are nearly 50 million Americans over age 65. That number is expected to increase by more than 50% over the next 15 years, when the entire baby boomer generation will be eligible for Medicare.

Rising health care costs, along with new technology and changing views of aging, have pushed the traditional health care model to be more consumer-centric. Retailers increasingly see themselves as a marketplace to deliver personalized health care. And insurance companies and firms trying to manage health care costs are becoming more open to working with them.

Best Buy had spent several years building out its own remote-monitoring service for seniors, called Assured Living, but is discontinuing the effort because it is similar to GreatCall.

Best Buy last month notched a deal as exclusive U.S. retailer of a $300 in-home medical kit by TytoHome, which includes a telehealth hookup with a medical clinician.

More broadly, Best Buy’s future growth strategy involves helping people get the most out of their gadgets, whether purchased at Best Buy or elsewhere.

The company is expanding its fleet of experts who make house calls to help all the technology work together — and make sales. GreatCall already has replaced its contract workers with Geek Squad staff to set up remote monitoring systems.

Standing out in a crowded field

While the technology holds promise to keep older adults living independently, it’s not a panacea.

A five-year, $1.25 million University of Minnesota study that focused on the effectiveness of remote monitoring for caregivers of people living with Alzheimer’s disease found mixed results. “Overall, these technologies aren’t as efficacious as you might think,” said Joe Gaugler, a public health professor, said of the initial findings. “The caregiving needs of someone with early-stage is very different from someone with moderate-stage dementia, related to wandering, behaviors and other types of issues.”

GreatCall was founded in 2006 by Arlene Harris, a telecommunications entrepreneur and inventor who partnered with Samsung to develop a senior-friendly phone that GreatCall now markets as Jitterbug.

A Chicago-based private-equity firm bought the company in 2017, before selling to Best Buy.

In a crowded field of technology players vying for a share of products to assist aging baby boomers, GreatCall’s products have received high marks in comparisons from Consumer Reports, Checkbook.org, PC Magazine and Digital Trends.

The company works with the Verizon network on its mobile products. Services include health care coaching, “concierge” services that can call a Lyft driver or the urgent response service it calls 5Star.

Best Buy was one of the first retailers to begin carrying GreatCall products, starting in 2007. They also are sold direct to consumers through GreatCall’s website, on Amazon.com and by other retailers such as Sears, Rite Aid and Walmart.

Under Inns, who has been with GreatCall since its early days, the company has grown steadily through acquisitions. Inns declined to provide financial details, but said it has long been profitable, with annual sales north of $300 million.

Among the key deals was the 2016 purchase of Healthsense, a maker of wireless sensors, which GreatCall now markets as Lively Home.

GreatCall has grown from about 250 employees a decade ago to more than 1,200. It operates two call centers, with plans to open a third in October.

Managers said the company’s top focus is to support the 24/7 call center workforce.

“These are difficult conversations,” said Kellie Fernandez, director of GreatCall’s customer care. “You may have to repeat yourself many times. You may have to shout because the person can’t hear you. You are dealing with life and death.”

All GreatCall employees go through sensitivity training, including those who work in accounting, billing, engineering and marketing.

“We want to make sure people have true empathy when talking to seniors,” said Lynn Herrick, GreatCall’s chief operating officer