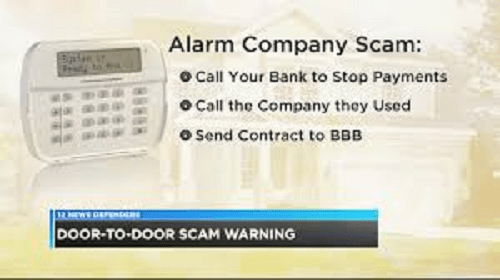 I’m sure this has happened to you: You’re doing some work around the house and the door bell rings. It’s somebody trying to sell you something. Most of the time they are legitimate businesses or fundraisers but you have to be careful.

The Better Business Bureau says a Montgomery woman was recently scammed out of money by a person claiming to work for an alarm company.

According to BBB, the man said he worked for ADT. The victim already had an ADT system but the man told her he could upgrade her security and save her some money. The woman eventually gave the “salesperson” some financial information. When she later called to check on her contract there was no answer and her money was gone.

David Smitherman with the BBB of Central Alabama offers these four tips if you feel like you’re the victim of a door to door sales scam:

1. Call your bank immediately to stop payment on all transactions.

2. Call the company the person claimed they worked for and report the scam.

3. Send the contract to the Better Business Bureau so they can document the scam.

4. You are under no obligation to let ANY door to door salesperson in your home or even talk to them.
So be careful if someone comes to your door offering an upgrade to your home security system. If you want an upgrade it’s safer to reach out to the company yourself. That way you know you’re getting a real employee.
If you have questions about a company check out the Better Business Bureau website and you can also get a look at the latest scams in your area by using the Scam Tracker.
Copyright 2019 WSFA 12 News. All rights reserved.