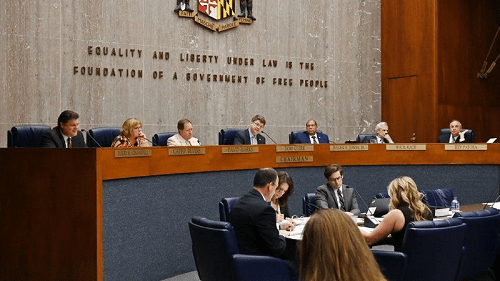 The Baltimore County Council approved legislation Tuesday night to require more security at gun shops and gun shows. … The bill, known as the Secure All Firearms Effectively, or SAFE, Act would create a new license for firearm stores and temporary gun shows in the county.

The council’s four Democrats and two of the three Republicans voted for the bill after they spent more than an hour discussing nearly a dozen amendments. Dundalk Republican Todd Crandell was the only council member who voted against the amendments and the bill itself.

The bill, known as the Secure All Firearms Effectively, or SAFE, Act would create a new license for firearm stores and temporary gun shows in the county. Those shops and shows wouldn’t be able to sell or store firearms without the license.

“We had a strong bipartisan group of council members come together and enact legislation that’s going to keep Baltimore County and the greater Baltimore region much more safe,” County Executive Johnny Olszewski Jr. said after the vote.

The proposal would require gun shops and shows to install alarm systems registered with the county and video systems. Shops also would have to install bollards or another physical barrier to prevent burglars from using a vehicle to enter the building.
[More Maryland news] Baltimore was thirsty during Prohibition, and the Kavanaghs stepped up »

The shops also would be required to install security gates or screens over windows and doors. Weapons would need to be locked in a safe and secured room when the business is closed, or the police chief could approve the use of a security guard. Temporary gun shows would require live security guard coverage when the show is closed.

Olszewski, a Democrat, has cited a spate of burglaries in recent years as motivation for the bill. Seven county gun shops were burglarized a total of 10 times in 2018 and 2019. Burglars stole firearms in four of those burglaries, including 51 weapons in one incident.

Supporters, including Sheriff Jay Fisher, have called the bill “a straightforward public safety solution” to keep guns away from criminals. Gun shop owners and pro-gun organizations, however, fear the costs associated with the legislation will force businesses to close and lined up last week at a hearing to oppose the bill.

“As written, I think it would have been very damaging to the gun retailers in Baltimore County,” Cockeysville Republican Wade Kach said. “I think that many of them may have gone out of business.”

The council approved seven amendments to the bill. Some of the amendments were technical in nature, but most of the changes sought to limit how much the law will cost businesses.

Republican councilmen Kach and David Marks, for instance, joined council chairwoman Cathy Bevins and councilman Tom Quirk, two Democrats, to sponsor an amendment removing application and licensing fees from the bill. Kach and Bevins, a Middle River Democrat, added an amendment to create a county grant program for existing gun shows that would match up to $10,000 and provide no-interest loans. The program’s cost will be disclosed in the county’s budget for fiscal year 2021.

After the vote, Olszewski said “the core of this legislation is intact.” Gun dealers who decide to operate in the county will have to abide by “common sense provisions” under the law for the sake of public safety, he said.

“Having those protections in place is so necessary, not just here, but in Howard and Montgomery counties and across the country,” Olszewski said.

The bill was praised by gun control groups such as Everytown for Gun Safety and Brady.

Maryland’s local governments have little regulatory control over firearms because state law preempts the right of any local jurisdiction to regulate the sale of a regulated firearm. Olszewski’s bill applies only to shops within 100 yards of a “place of public assembly,” an exception in the state law. All but one of the county’s 19 firearm shops are located near a place of public assembly.

Olszewski has 10 days from receiving the bill to sign or veto it, and the law would take effect 45 days after signature. The bill also offers existing guns a six month grace period to obtain the license.

Kach worried that some shops may need to close if they fail to comply with the law.

Hyatt told The Baltimore Sun after the vote the county “certainly hopes” none of the existing stores will close, and that her department plans to work with businesses to make sure everyone is in compliance.

Marks and Kach nonetheless said it was “difficult” for them to vote for the bill given its effect on gun dealers.

“It is an unfortunate fact that responsible gun retailers will now have to bear the burden because a few businesses could not enact common sense improvements,” Marks said.

CONTACT
Wilborn covers Baltimore County for The Sun. Previously, he covered education for the Times-Picayune in New Orleans. The New Orleans native is a graduate of Louisiana State University and previously interned at the Washington Post.