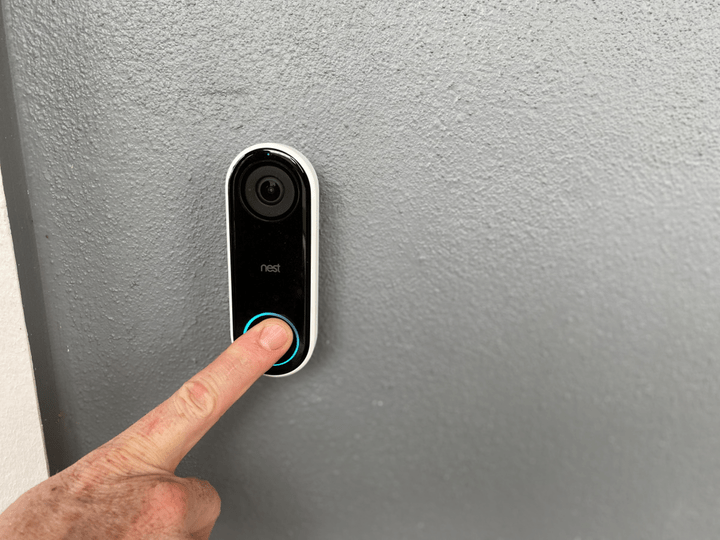 Telltale blue circles glow from the doorposts of rowhouses across Baltimore as the increasingly popular Ring video doorbell and other private security cameras keep a silent watch over the city’s streets, sidewalks and stoops.

The Baltimore City Council wants to incentivize more people to buy these kinds of surveillance systems and partner with the police department to share footage that could help officers tackle crime in their neighborhoods.

Councilman Eric Costello introduced legislation this week that would give residents a rebate of up to $150 if they install a system such as Ring or Nest. In return, people would have to sign up for the police department’s CitiWatch Community Partnership program, a registry that contains information about where there are private surveillance systems and who owns them.

These kinds of cameras are “critical in the crime fight,” said Councilman Isaac “Yitzy” Schleifer, chairman of the public safety committee. “We’ve seen countless cases get resolved based on people’s security systems on their homes.”

The idea is supported by the majority of the all-Democratic council, and the public safety committee will hold a hearing Thursday on the bill.

Democratic Mayor Bernard C. “Jack” Young is excited about the legislation and has instructed his agency heads to start looking for a way to fund it, said spokesman Lester Davis.

“He’s hopeful the council will fast-track it and get it to his desk as quickly as they can,” Davis said. “He’s looking forward to signing it.”

Already in some parts of the city, residents have launched their own networks of home security cameras to compare images of people who steal packages and break into homes. There are hundreds of such devices around the Patterson Park neighborhood and observations from the footage have contributed to arrests. Police say it helps solve and prevent burglaries in the area.

But council members say the high cost of a sophisticated home security camera — Amazon’s Ring video doorbells range from $100 to $500 — can be prohibitive in impoverished parts of the city. This program would ease that burden.

The rebate wouldn’t be allowed to exceed the cost of the system.

Already, Schleifer said, people in his district have come up to him to discuss the legislation and told him that while they’ve always wanted to install a security camera, they “simply couldn’t afford it.”

Some civil liberties advocates have raised concerns about privacy and racial profiling related to Ring and the company’s growing number of partnerships with police departments. They question who will have access to the recordings, how long footage will be preserved and how secure footage is from hackers.

Jay Stanley, a senior policy analyst with the ACLU, said the group worries about residents feeling coerced into handing over their private videos to law enforcement.

“We know how ‘voluntary’ a request from a police department can be for many people,” he said.

The city has its own network of about 700 closed-circuit cameras, and in May is expected to allow a private company to start flying three surveillance planes over Baltimore as it aims to stem an unrelenting wave of violence.

Schleifer emphasized that the city’s private camera program isn’t akin to someone handing over their password to the Baltimore Police. The CitiWatch Community Partnership is a voluntary program linking the police department and residents. Home and business owners register their systems with the city, listing the cameras’ locations and their contact information. Then, detectives can reach out specifically to people who may have potential video evidence.

If officers believe footage would be useful in solving a crime, police would have to get a camera owner’s permission to access the video.

“When people sign up for the program, that doesn’t mean the police department has access to your camera,” Schleifer said. “It just means that when an incident takes place and police look up the address, they can see what cameras are available.”

City officials were not able to provide a number Tuesday of how many people already have registered systems with the city.

The sign-up website includes several disclaimers, including: “The Baltimore City Police Department may collect from your registered cameras any footage that shows or relates to possible criminal activity. The footage may be used as evidence during a criminal proceeding.”

It also affirms that “under no circumstances will the Baltimore police department access camera systems directly.”

To get the rebate, people would have to agree to register with the CitiWatch program and point their camera into a public space for at least two years. Homeowners would get the rebate for up to two cameras, while commercial property owners would it get for three devices.

Costello expects a “steep increase” in the number of private security camera systems, should the law pass.

“We think what we’ve put together here is going to work for Baltimore,” Costello said.

The city would be required to prepare an annual report on the program, including the number of rebates distributed and what neighborhoods are generating applications.

The District of Columbia launched a private security camera rebate program three years ago, and so far, 7,400 rebates and vouchers have been issued. Monthly reports outline some of the program’s successes. The most recent one noted that “there were two arrests made in which video footage was extracted from a security camera owned by a program participant. Both arrests were made in a homicide case.”