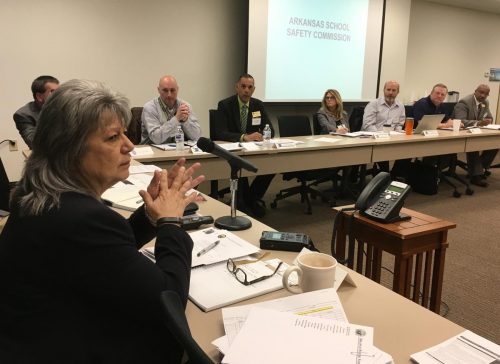 Dr. Cheryl May, chair of the Arkansas School Safety Commission, at the first meeting of the commission on March 13,2018.
CREDIT MICHAEL HIBBLEN / KUAR NEWS
9.18 – KUAR –By SARAH KELLOGG

The Arkansas School Safety Commission met with the state fire marshal on Friday to discuss its upcoming recommendation on school evacuations or fire drills.

The commission is proposing that schools wait and determine the source of a fire alarm before having students and staff evacuate buildings. Some past school shootings occured after fire alarms were pulled. During the meeting, State Fire Marshal Lindsey Williams said fire alarms are sometimes used to set the stage for acts of violence.

Williams also said there is no law requiring an immediate clearing. Schools do however, need to alert their local fire department right away.

The committee said it received some pushback from some local fire officials who do not approve of a short delay. Williams said he would be willing to talk to both fire authorities and schools to resolve this disagreement.

Commission Chair Dr. Cheryl May, says she found the Williams’ presentation very helpful. She hopes to come to an agreement with local authorities.

“They’re an important part of this and they need to be on the same page as everybody,” May said.

The commission’s preliminary report is available at the Arkansas Department of Education’s website. Its members are working towards finishing their final report by the end of November.