Arkansas governor: Public health emergency will end on May 30

The governor first declared a public health emergency on March 11, 2020, the day the first case of coronavirus was confirmed in Arkansas. Over a year later, Hutchinson said the order is no longer necessary.

“The reason that we’re ending the public health emergency declaration is that everybody in Arkansas knows what to do,” he said at a briefing Thursday. “Our hospitalizations are down. Every adult in Arkansas — in fact, 12 plus years of age —has access to vaccines that we did not have access to before.”

The state’s hospitalizations have dropped from 1,371 in January to 188 this week.

“It’s not an emergency,” he said. “It’s a maintenance of effort in terms of our vaccines and managing the pandemic.”

Hutchinson last extended the emergency order for 60 days on March 30 after a battle with lawmakers.

Arkansas legislators have already tackled telemedicine and liability protections for businesses — key orders in the declaration, Hutchinson said Thursday. And the state is working on finding other ways to supplement additional SNAP benefits included in the order that are set to expire in June.

Although he said he hopes it won’t be necessary, Hutchinson could declare a public health emergency again if people aren’t being vaccinated at the rate he expects or if there is a resurgence of cases in the fall.

“The fact that I’m ending the public health emergency should not diminish anyone’s intensity on the need to get a vaccination or the need to protect from the virus that is still remaining in parts of our communities,” he said. 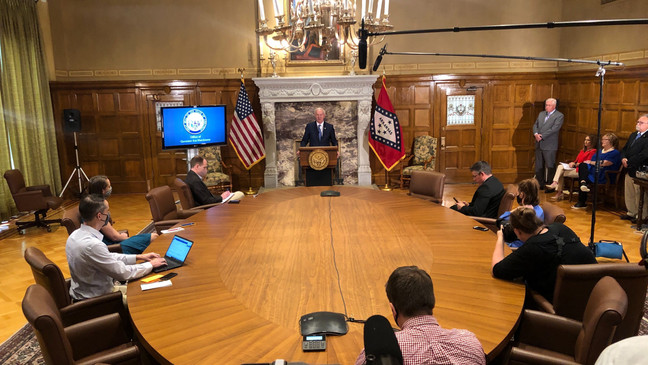 Hutchinson held a briefing on Thursday at the Capitol. (Photo: KATV)

The governor also announced on Thursday that a $100 bonus will be available for 25,772 executive branch state agency employees if they get the COVID-19 vaccine by July 1. Contract and independent employees are not eligible for the bonus but Hutchinson said he hopes independent agencies will offer the same incentive.

“We want the public to know the workplace, we’re doing everything we can to make it safe and have employees vaccinated,” Hutchinson said.

On Thursday, 43.7 percent of state agency employees had been vaccinated; Hutchinson’s goal is 70 percent. Employees will have to provide proof of vaccination to qualify for the bonus, he said.

Arkansas on Wednesday added 256 new probable and confirmed cases of the coronavirus. Active cases increased by 54 to 2,053. Three more deaths were linked to the virus, bringing the state’s total to 5,808.

Hospitalizations increased by 15 from Wednesday to 203. The state logged 2,643 daily PCR tests and 658 antigen tests.

Another 6,900 vaccine doses were provided in the state. The number of people fully vaccinated in Arkansas increased by 6,324 to 863,429.