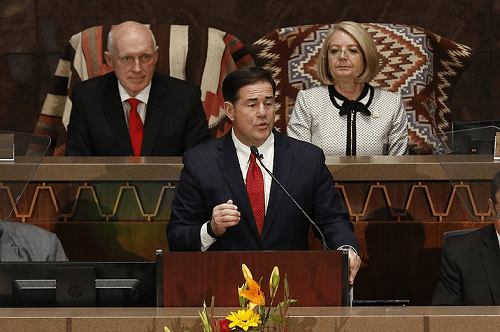 The Arizona Legislature is looking to diminish the influence of experts on the boards that license and discipline engineers, certified public accountants, barbers and a variety of other professionals.

The Arizona Legislature is looking to diminish the influence of experts on the boards that license and discipline engineers, certified public accountants, barbers and a variety of other professionals.

Responding to a request by Gov. Doug Ducey in his State of the State speech last month, a state Senate panel advanced legislation Thursday that would make licensed professionals a minority of the members on the licensing boards.

People appointed by the governor who aren’t licensed in the profession would comprise a majority of the boards, which set professional standards, decide who meets the qualifications to be licensed and review complaints for possible discipline.

The proposal comes on the heels of a major regulatory overhaul last year that required the state to issue professional licenses to people holding a similar credential from another state.

Licensing boards controlled by working industry professionals have faced growing criticism from liberals and conservatives alike who say they needlessly depress the supply of workers in the field, harming economic mobility and driving up prices for consumers.

“We’ve sought to chip away at the deep-rooted cronyism,” Ducey said in his speech to lawmakers in January. “But there’s still too many insiders and industry good ol’ boys.”

Republicans on the Senate Commerce Committee advanced the measure over strong opposition from experts in several industries, particularly engineering fields, who said it would be dangerous to expect untrained board members to oversee compliance with highly technical regulations and professional expectations.

Expertise in an industry is needed to protect the public from incompetent work, critics of the bill said.

“I believe it will be a substantial decrease in public safety,” Gregory Piraino, a licensed mechanical engineer in Tempe, told the committee. “Technical issues should be heard by people with technical training and a technical background.”

However, several land surveyors supported the change, telling lawmakers they believe their licensing board plays favorites and it would be helpful to put control over the board in the hands of people without a financial stake in the industry.

Arizona’s licensing boards already include some members representing the public, not the licensed industry, but they don’t comprise a majority.

In addition to the Technical Registration Board, the bill would apply to the boards overseeing barbering, cosmetology, accountancy, funeral directors and embalmers, and massage therapists. It would not apply to medical or legal professions.

Sen. Michelle Ugenti-Rita, a Scottsdale Republican who sponsored the bill, said public members of the boards would be vetted by the governor’s office and many of them confirmed by the Senate.

“We don’t want to have protectionism at the expense of being able to have an industry that’s open for competition,” Ugenti-Rita said.

Copyright 2020 The Associated Press. All rights reserved. This material may not be published, broadcast, rewritten or redistributed.