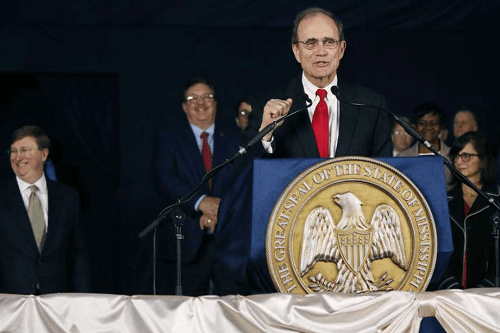 Gov. Tate Reeves, left, laughs as Lt. Gov. Delbert Hosemann uses his fist as a gavel to dissolve a joint session of the Legislature that gathered to listen to Reeves’ first State of the State speech, outside the Capitol in Jackson, Miss., Monday, Jan. 27, 2020

Mississippi lawmakers have had a slow start to their four-month session, but the pace is about to quicken as committees start debating bills dealing with the criminal justice system and other issues.

March 3 is the first big deadline. That’s the last day for House and Senate committees to either pass or kill the first round of general bills filed in their own chamber.

Mississippi’s prison system is under investigation by the U.S. Justice Department after outbursts of violence that killed some inmates and injured others. Cliff Johnson, director of the MacArthur Justice Center at the University of Mississippi law school, told members of two House committees Thursday that prisons are crowded and understaffed.

Shortly after violence erupted at the Mississippi State Penitentiary at Parchman in late December and early January, the state entered an emergency contract to move 375 inmates from Parchman to a privately run prison in nearby Tutwiler.

Republican Gov. Tate Reeves has said he wants the Department of Corrections to shut down Parchman’s Unit 29, where the much of the trouble took place. He said the state could consider reopening a prison at Walnut Grove. The House on Thursday passed House Bill 756, which require the state Department of Finance and Administration to determine the potential cost of repairs to the Walnut Grove facility. It is owned by the state but was run by private companies. The bill goes to the Senate for more work.

Legislators this year could consider pay raises for some of the lowest-paid state employees. Republican Lt. Gov. Delbert Hosemann has said he wants to boost pay for people currently earning less than $21,000 a year in full-time jobs.

The full Senate has already passed a bill to a $1,000 pay raise to most teachers and teachers’ assistants. Slightly larger raises of $1,100 would go to teachers in the first two years of their careers, in an effort to boost the beginning pay and make the jobs more attractive. Senate Bill 2001 awaits action in the House.

Reeves has already signed House Bill 1, to provide enough money to pay the full $1,500 pay raise that teachers started receiving this school year. The raise was approved during the election-year legislative session of 2019, but too little money was originally budgeted because of a bureaucratic error in how school districts count certain categories of teachers.

Under the heading of spend a little money to try to keep a lot, Reeves has already signed Senate Bill 2149. It allocates $400,000 for the state to do advertising and marketing about the 2020 Census. The federal head count is done every 10 years, and it’s important because Census numbers determine how many seats each state has in the U.S. House of Representatives and how much federal money each state receives for a wide range of programs.