Alarm Panel Dispute Lives on Despite End of UL Investigation 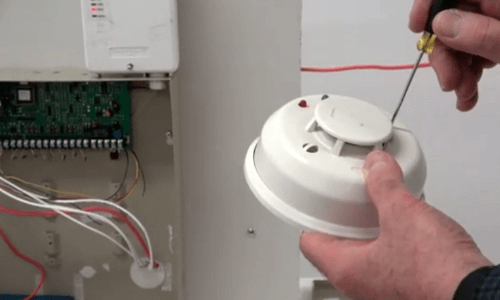 In a burn test video, Jeffrey Zwirn claims to demonstrate hazard issues and why enforcing existing UL standards are so important.

UL says it found no compliance issues related to claims that tens of millions of alarm panels should be recalled due to safety concerns.

Alarm and security forensic expert Jeffrey Zwirn and his business partner Keith Jentoft are laying plans to continue airing the findings of a forensic report that assert the noncompliance of UL and NFPA 72 codes render tens of millions of alarm panels potentially hazardous.

Zwirn, a contributor to SSI, is president of IDS Research & Development, an alarm and security consultation, expert litigation witness and training authority. Last year he detailed his findings in a 43-page report that focused specifically on non-compliance issues involving UL 985, UL 1023, NFPA 72 of the National Fire Alarm Code, and NFPA 72 of the National Fire Alarm and Signaling Code.

Zwirn said his analysis exposed noncompliance dangers and vulnerabilities inherent to single data-bus connected control units that are commonplace to hardwired residential and commercial alarm panels. Under a single fault condition, such as the introduction of a short circuit to the data-bus circuit, fire and intrusion alarm panels can be rendered partially or fully nonfunctional, Zwirn said he discovered as part of his forensic practice.

Following a formal request, UL opened an investigation into the claims documented in the forensic analysis, which also called for an extensive panel recall. On Dec. 11, the global safety certification company rendered its decision in a brief email, stating that assertions involving faults associated with the attack of data circuits by fire or intrusion are not part of UL 985 and UL 1023.

Along with announcing the conclusion of its investigation, UL said any further proposals for the revision of current UL Standards could be submitted through the UL Collaborative Standards Development Process.

In a letter dated Jan. 16, Zwirn and his associates responded that UL’s conclusions did not address findings in the forensic analysis, which were supported by two independent expert reports. The letter also referenced previously submitted videos that demonstrate the susceptibility of the data buses through the introduction of a short circuit. (You can view the videos in SSI’s initial report here.)

After requesting results of the investigation into the incident report, a UL spokesperson provided SSI the following comment via email: “Due to client confidentiality, we are unable to release the details of the investigation. We can say that we conducted a thorough review of certification against the requirements in the standard. We found no compliance issues that would impact products in the market.”

AHJ Outreach Plan Said to Be in the Making

Zwirn and Jentoft, a security industry veteran, are marketing a small control unit module they claim provides an easy fix to non-compliant single data-bus control panels. They said they won’t be submitting any proposals to seek revision of current UL standards since the issues raised by Zwirn are already outlined in the existing standards. Instead, they are preparing a national outreach and training program for AHJs.

“Now that UL has officially responded, the issues are clear and actionable and we have a chess board to play on,” Jentoft said. “We believe that UL must be held accountable.”

Jentoft likened the concept of the outreach and training program to the Partnership for Priority Verified Alarm Response, which works with law enforcement and electronic security stakeholders on the value of video to verify alarm activity during the dispatch process. He founded PPVAR in 2012 while serving as president of RSI Video Technologies.

“We are educating the AHJs themselves on the existing standards, UL’s official position and the imminent danger this poses to their community,” Jentoft explained. “They are already very interested. We will be presenting at their conferences and have been asked for an online training program that will be promoted by their state and local associations.”

He said the new organization will focus on training fire alarm AHJs on three key areas: existing UL and NFPA standards and existing fire alarm systems; UL’s official position that the catastrophic failures alleged by Zwirn’s analysis are not covered; and, the imminent danger this could pose to their communities. He referenced a new burn test video conducted by Zwirn that demonstrates the hazard issue for the lay person and why enforcing the existing standards are so important.

Jentoft said he hopes to have a formal announcement before ISC West on the outreach and training project. In addition, he explained certain fire alarm manufacturers whose equipment does comply with the standards have expressed interest in helping with the effort and join the new group.

“Like video verification, it will take time, but we are in this for the long haul. UL’s disregard for their standards has created a situation where there are millions of fire alarms that are unsafe and can catastrophically fail at the worst time,” he said. “We hope to change that with the help of the AHJs.”