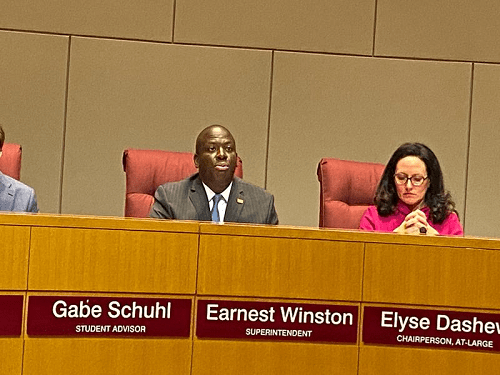 What started about a year ago as a push for safer schools has turned into a war of words between Charlotte-Mecklenburg Schools and Centegix, a company that sold the district a panic-alarm system. Caught in the middle are Mecklenburg taxpayers, students and CMS employees.

Wednesday afternoon, the Atlanta-based company accused CMS Superintendent Earnest Winston of making false claims that appear “to be politically motivated.” Centegix did not say why it believes Winston’s statements could have been politically motiviated. Winston says the company has failed to provide alarms that work reliably, even after months of efforts to get the system working.

“Our system works as promised,” the Centegix statement says (see full statements from Centegix and CMS below). It says the system was used as recently as Wednesday morning, to trigger a modified campus lockdown for an unspecified event at Garinger High.

In purchase orders issued between November 2018 and May 2019, CMS agreed to pay Centegix $1.7 million to install a CrisisAlert system in 26 schools. It provides badges for employees, allowing them to push buttons that can trigger a lockdown or issue a call for help.

On Jan. 10, after getting questions from reporters, Winson held a news conference saying the system had repeatedly failed. He gave Centegix 30 days to get it working. After the Feb. 10 deadline, Centegix claimed success and Winston said he wants the district’s money back.

The Centegix statement says the company is “disappointed CMS leadership chose not to work with us and to ignore the successful completion of testing. Our many requests for contact with leadership received no response. The lack of transparency and collaboration is unfair to vendors and appears to be politically motivated. It does not advance the goal of enhancing student safety.”

In news releases issued Tuesday and Wednesday, the company details what it describes as successful use of the system. Among them: A full lockdown launched by an Indepdenence High employee after a credible gun threat there and weather alerts in reponse to last week’s tornado warnings.

After Tuesday’s meeting, Winston declined to discuss details of the Centegix claims, saying he believed his report was complete. Nor would he elaborate on how he planned to get money back. He has not reponded to a request for comment on the Wednesday statement.

Centegix sent the written statement but did not respond to WFAE questions about whether it would refund the $1.1 million CMS has paid or try to collect the remaining $600,000, which Winston says he will not pay.

Over the past month, we have worked with the CMS project team to meet the CrisisAlert™ testing deadline that was unilaterally imposed by the district.  During this effort, we repeatedly received feedback from CMS personnel that the solution was consistently performing as promised. CMS leadership agrees that the core function of our platform – providing the precise location when a user clicks the badge – “press button, get help” – is flawless.  The system was used again this morning at Garinger High School to successfully initiate a Modified Campus Lockdown.

The statements made by the district at Tuesday evening’s Board of Education meeting are false. It is abundantly clear that there is a disconnect between the CMS project team and CMS leadership, who do not have accurate information about this project, including the written documentation from the CMS project team defining the agreed-upon success criteria and that we passed these criteria.

The system we delivered is fully operational and meets all of the requirements of the district’s RFP. We stand by our solution, the results of the testing conducted by district personnel, and live operational results. Our system works as promised.

Since the summer of 2019, CMS has used the CrisisAlert solution to successfully deliver more than 1,800 testing alerts. Also, more than 50 live alerts that have been initiated at the four pilot schools since the November 2019 launch. These alerts included emergency incidents, lockdowns, modified lockdowns, weather alerts, medical emergencies, and physical altercations.

Most notably, the alerts included a Full Campus Lockdown initiated by a CMS employee via a CrisisAlert badge on January 15, 2020, in response to a credible gun threat at Independence High School, which was widely reported. Additionally, CrisisAlert was successfully utilized Thursday, February 6, 2020, to initiate Severe Weather alerts in three schools due to tornadoes and extreme weather conditions. These alerts fulfilled our mission of keeping students, teachers, administrators safe.

Here are the facts contradicting the district’s claims:

CMS leadership stated that the platform does not work as evidenced by the strobe lights not activating.

Part of our agreed-upon success criteria was to confirm with the CMS personnel that every alert color is active on every beacon.  The CMS and Centegix project teams were present at the testing and confirmed that every color on every beach was active.

CMS leadership stated that our team was unresponsive, even during the 30-day period.

We expended 5,000+ people hours between our team and our partners over the 30-day period.  We were with, and available to, the CMS project team at each of the 26 schools at which the CrisisAlert is installed and tested.

CMS leadership stated that some areas did not have appropriate coverage.

Part of the agreed-upon success criteria was to confirm that all areas had appropriate coverage. CMS specifically told us, due to the accelerated timeline, that focus would be on certain areas in each school.  Both the CMS and Centegix project teams were present at testing, and confirmed coverage was unless we had to return because access to the site was not available.

CMS leadership stated that the system does not track movement of teachers .

This feature was not included in the RFP nor in the agreed-upon success criteria.  This is a capability that we have not productized in the platform because of concerns from other customers.

We are disappointed CMS leadership chose not to work with us and to ignore the successful completion of testing.  Our many requests for contact with leadership received no response. The lack of transparency and collaboration is unfair to vendors and appears to be politically motivated.  It does not advance the goal of enhancing student safety.  The decision by CMS leadership is inconsistent with over 1800 documented successful tests and 50 live alerts that have been presented and demonstrated to district personnel.

This unfortunate decision is a significant step backward for the district and its ability to ensure the safety and security of its students and families.

Charlotte-Mecklenburg Schools ended its relationship with security consultant Centegix on Feb. 11, citing the Atlanta-based company’s failure to deliver a reliable alarm system that could monitor an entire school.

The Centegix technology was intended to add to the district’s overall school-safety net, which includes screenings, dogs trained to detect drugs and guns, the LobbyGuard sign-in system for visitors, surveillance cameras and social/emotional supports for students.

The Centegix decision followed months of testing of the system, which gave school personnel badges that were promised to allow instant calls for help. When problems were identified in the spring of 2019, CMS stopped payments to Centegix but continued to work with the company to make the system effective. The total cost of the program was $1.7 million.

“After reviewing the persistent problems with Centegix, it appears that we have a system that works some of the time in some areas of our schools,” Superintendent Earnest Winston told the Charlotte-Mecklenburg Board of Education at its Feb. 11 meeting. “However, Centegix has been unable to deliver what was promised: a security system to comprehensively provide coverage for a whole school. So we are terminating our relationship with the company and will seek to recover the $1.1 million we have paid. We will not pay the remaining $600,000.”

The district selected Centegix to provide a security system for 26 schools. Installation in the high schools began in early 2019, installing beacons that were supposed to sound the alarm when a teacher or staff member pressed an alarm button on a badge provided by Centegix. After the initial installations were complete, the district began testing the system intensively, independent of the Centegix testing. Problems began to surface in the spring of 2019: Badges and beacons didn’t work properly. The tracking features of the system, intended to show administrators where a problem was occurring, didn’t work reliably.

When Winston was named superintendent in August 2019, he instituted a review of the system. Based on that review, he gave Centegix an ultimatum on Jan. 10: Fix the problems within 30 days or CMS would end the relationship.

“We recognize that this is cutting-edge technology and some glitches are to be expected. But despite our repeated requests for greater reliability and more responsive support from Centegix, we have not seen the improvements we hoped to see,” Winston said. “So we have decided to end the relationship with Centegix. We will continue to look at new security technology as it is developed, but we don’t want to be a testing ground for a vendor’s product. We had hoped that Centegix would help us strengthen our safety net but it didn’t work out that way.”