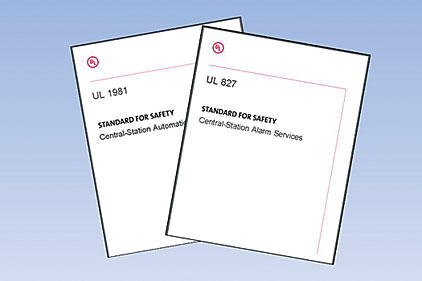 As technology continues to evolve at a rapid pace within security, monitoring companies and third party standards organizations such as UL are doing their best to understand what this means for central stations today, especially in regard to creating requirements that reflect the current state of innovation within the industry.

In March, UL published a proposal to extend the effective dates for two sets of requirements that are new to the eighth edition of UL 827, The Standard for Central Station Services. The proposed effective dates—July 31, 2018 was extended to Jan. 15, 2019 and July 31, 2020 was extended to Jan. 15, 2021—align confirmation of new requirement compliance with UL’s annual audit program for monitoring stations.

“The new requirements in UL 827 have proven to be quite challenging,” Alan Cavers, managing engineer of UL’s Certificate Service business, said in the announcement of the extended dates. “Our monitoring station customers have made great progress, but in many cases, UL needs one more on-site visit to finish compliance determination. The current mid-year effective dates would require that UL establish separate engineering projects to assure the necessary work is completed prior to the effective date. Those projects would be outside of the annual audit program, adding extra cost and complexity to our customers’ experience. Adjusting the effective dates as proposed would simplify the process for all parties.”

“What came to be the final requirements were actually started back in early 2008, and I was on that original working group committee back then and it was really focused on—how do we take what was an evolving industry out of the archaic ages of serial cables and green screens and move that standard into what we have and need today,” said Hertel.

Chris Newhook, central station manager, American Alarm & Communications Inc., told SSN, “Overall, the changes are relevant and in sync with where the industry is going. The enhancement of security requirements, the delineation of some of the more redundant aspects shared between the two codes, the emphasis on reporting—it’s a long list.”

He continued, “But their changes and revisions are driven by the industry. It’s a challenge for UL as well, frankly speaking. Technology moves at such a blinding rate they have their work cut out for them trying to maintain their pace. Pending updates to this newest edition are already reviewing how we can process lower level signal activity, remote access to automation. All-in-all, these standards are very much living documents.”

Rod Coles, chief executive officer, Bold Technologies, agrees on the importance of these new standards. “There are some key things in there that we needed, like monitoring of devices, CPU usage, hard disk space—things like that everyone really should be doing but they weren’t,” Coles told SSN.

One of the key concepts introduced in UL 827 is the Monitoring Equivalency Weight, or MEW factor, which is determined by how many and the type of accounts a central station is monitoring, with three levels and corresponding requirements for each.

“You have all of these accounts coming into what are becoming pretty significant size facilities today monitoring a lot of accounts and representing a pretty big chunk of what is being monitored out there, so having requirements for the size of the organization is pretty important,” said Hertel.

Newhook added, “The MEW calculation is straightforward enough but those companies that exceed a 100,000 or greater ‘weight’ are now on the hook to have a redundant site from which to monitor. That said, these changes are no surprise and have been coming for some time and most companies of that size likely already employ a back-up location at a ‘reasonable distance’ from their existing facility. Fortunately, those companies have until 2020 to be up-and-running.”

As Newhook points out, both the 827 and 1981 revisions posed a challenge to everyone—central stations as well as their automation providers—and many of the revisions were dependent on software upgrades.

“There were some pretty significant changes that they used in the new software to address the 1981 and 827 requirement,” Newhook explained. “So it is a challenge because we have had to train all of our people on that and then we’ve got to make sure that the software integrates with our system of record—our accounting and sales software, for example. And because all of that information is now dropping down to a new database through a new API, there are a lot of plates spinning.”

He continued, “Our central station has had to corral resources in IT and Facilities to make sure we are hitting the marks required. Network security and topography, communications platforms, access, as well as our infrastructure at our location comes into play on this.”

Coles added, “With UL 827 we had to take account of that in our cloud data centers but the bigger changes were in 1981, which really affected us more as a software company. There were things that we had to do in our software for it to be compliant and to be honest it was one of the more major updates that UL has done. Some of things that they focused on in 1981 were encryption, security networks, VMs (virtual machines), which are becoming more of a fact of life but were not covered with 1981 prior to this. A lot of the things that we have done within our software are on the reporting side of things. Part of the other requirements was being able to monitor things that are happening within the equipment the automation software is running on, including things like CPU capacity.”

Coles pointed out that the emergence of cloud technology has also impacted standards. “We’ve got a lot of customers on the cloud now and we just opened our second data center because we flew through the UL requirements and had to open a second one,” he said, noting that one of the key advantages of the cloud is immediate redundancy. “So if you are a small central station with a few thousand connections, you have that redundancy that usually only the bigger centrals have.”

One of the challenges for UL, Hertel noted, is getting these standards to a level “that even moderately conforms to what other data standards are like today.”

Hertel still works closely with UL and the industry to drive change and relevant standards.

“UL is trying to figure out how to stay relevant, and has been getting feedback from the industry they serve on what they need to do to be and stay more relevant moving forward,” he explained. “For example, they’ve hired some people that are in the network security space, and they’ve hired some outside engineers and some newer people to come in and take a look at this new paradigm, and I think that they will eventually get there.”

Coles agreed: “UL has done a lot in the last five to 10 years to bring their level of understanding of IT up, and I think they are doing a whole lot better and have definitely improved their game.”

“We need UL to be a part of the equation,” added Hertel, who noted that it is key that the industry has a third party organization that not only has minimum standards but is a partner who provides more of a value proposition.

“They have to be much more performance-based and prescriptive based,” Hertel said. “They have to look at how to create processes, requirements and standards that address the new business model of today, because it is different.”

In addition to cybersecurity, Coles said that new technologies also pose a challenge for UL when it comes to creating standards and requirements for central stations.

“The big area that is going to change things is artificial intelligence,” Coles noted. “At what point is AI going to be making decisions that affect people’s safety? Where is that line drawn? I see a future—I don’t know how far in the future it is—but I can see a future where a central station could literally exist in the cloud, including most of the operators—why not? AI is going to change the way that we do business in every area, but in particular because you could have artificial intelligence making decisions on people’s safety. AI will revolutionize our industry and it is closer than people think.”