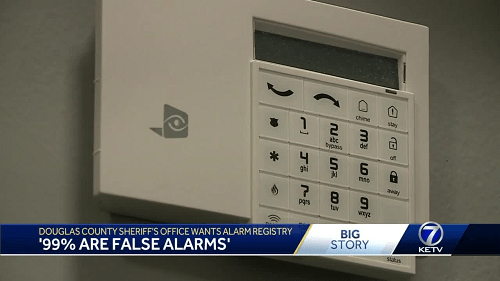 The Douglas County Sheriff’s Office plans to ask the county board to adopt an alarm registry.

Capt. Wayne Hudson said in the past three years deputies responded to more than 5,700 intrusion alarms in homes and businesses.

The Sheriff’s Office said that amounted to almost 3,000 hours wasted on those calls, costing taxpayers more than $125,000.

“It’s a service where they have to register their alarm systems. Then there are penalties for repeated false alarms during the registration cycle,” Hudson said.

It’d be $25 to register your home alarm every year and $50 for businesses. There’s no penalty for your first false alarm. The second will cost $50 and the third is $100, according to Hudson.

He said it’s about being responsible and making resources available for urgent calls and crimes.

“I don’t think it’s fair that we have to pay extra for the security of an alarm system when we’re paying an alarm company already,” Wendy Maloney, a homeowner, said.

It could also be a safety concern.

“I feel like it will make me not want to use my alarm so much because I tend to set it off, every once in a while. And I have kids who set it off and I don’t want to pay for every false alarm,” Maloney said.

The ordinance will be before the board next week.