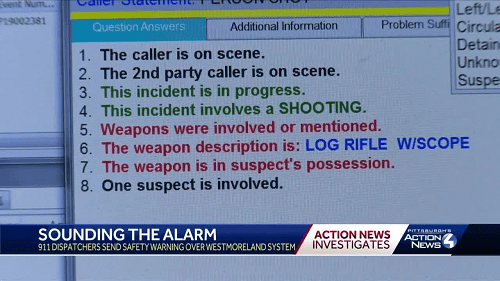 Some 911 dispatchers are sounding the alarm about a system they say is putting lives in danger.

It’s a dispatch program used in Westmoreland County. Programs like it will soon be required throughout Pennsylvania.

Watch the full report in the video player.

The ProQA program has dispatchers read a specific set of questions, depending on the call. 911 officials said the system ensures that each call will be treated the same.

“When somebody calls 911 they deserve the highest level of quality call service, no matter how many hours that dispatcher’s been at the desk,” said Bud Mertz, public safety director for Westmoreland County.

But Bernabeo said the questions dispatchers are forced to ask keep them from questions they need to ask. She said police frequently arrive at the scene of a crime without knowing the suspect’s description because dispatchers have not gotten to those questions yet. Multiple police sources confirmed that has happened.

“To be honest I respect that opinion. I totally disagree with it,” Knight said.

He said that when the company wrote the scripts for dispatchers, officer safety was the top concern. He said the system eventually prompts dispatchers to ask for a suspect’s description, but first they need to know exactly what kind of situation they are facing.

But Bernabeo is not the only dispatcher with concerns. Action News Investigates obtained questionnaires submitted to county officials anonymously. Multiple dispatchers said they believe the system creates a safety issue for police and the public.

One dispatcher wrote: “We have had multiple armed robberies where the officers are arriving on scene before suspect description is even asked.”

Another said: “The questions are out of order, take too long and don’t get the info to the officers before they get on scene.”

Some dispatchers said they are especially frustrated by how much time they have to spend on non-emergency calls. For instance, if a caller said there’s a cow in the road, dispatchers were required to ask the color of the cow.

But Mertz said every call needs to be taken seriously, and that means multiple questions are often necessary.

“So while I’m dealing with you on a nonemergency call, someone could have a heart attack over here and they can’t get through because I’m spending four minutes on an animal on the roadway. Does that make sense?” Bernabeo said.

Minneapolis had the same system as Westmoreland County. Police and dispatchers there reported many of the same concerns.

“It delays information getting from the 911 pickup to the officers getting dispatched,” said Bob Kroll of the Minneapolis Police Federation.

“Imagine you call and your kid has just been shot and I’m required to say what type of gun and as the parent is yelling, ‘Get me an ambulance,’ I have to repeat the question, ‘What type of gun?’ It doesn’t make sense,” said Carri Sampson-Spande, a former 911 dispatcher.

Earlier this year, Minneapolis decided to get rid of the ProQA dispatch system.

“They’ll get a better response from the dispatcher. They’ll actually be able to talk to them and they won’t have to read a script word for word,” said Kathy Hughes, Minneapolis emergency communications director.

“I don’t want to point fingers at Minneapolis because, quite frankly, we don’t talk about agencies like that. I can tell you agencies that don’t have quality assurance and quality improvement — which Westmoreland does — and agencies that do not mandate use of the protocol system are going to fail,” Knight said.

In a statement, Westmoreland County commissioners said they are committed to reviewing any complaints about ProQA, but they have no reason to reconsider their decision to buy it.

In the next three years, all 911 centers in Pennsylvania will be required to have dispatch systems with protocols, like the ProQA system.